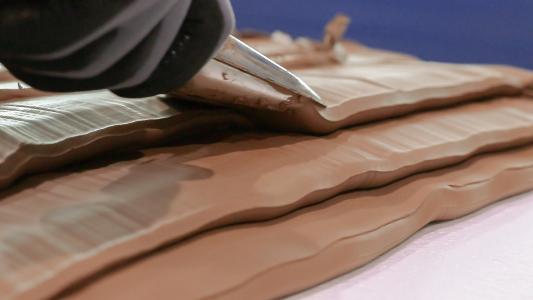 (PresseBox) ( Michelstadt, 20-02-27 )
A fundamental paradigm shift is currently taking place in design model making: Where craftsmanship and one's keen sense of proportion previously set the tone for more than a hundred years, largely automated systems will soon be taking over the conditioning and processing of clay (plasticine). The TARTLER GROUP is now proving to be the technological leader in this field, as, after two years of development, it presents one of the first system solutions for the machine dosing and application of clay: The Clay Application Machine CAMA 01, which enables automotive and industrial designers to gain entry to the semi or fully automated clay styling process. The system is supplied by the subsidiary SOMATA.

Since its invention at the end of the 19th century, model makers, architects and artists have used plasticine, a wax mass that can be kneaded by hand, for manual shaping. For years this material, commonly known as clay, has been used in large quantities in industry, primarily in the automotive industry. Up to now it has been applied by hand, with simple tools (spatulas etc.), and modelled with a high degree of sensitivity. And yet, especially when it comes to larger design objects on a scale of 1:1, the thermal conditioning and manual application of the base compound requires a lot of manpower and time. Heating up some 2.0 tons of clay in the form of bars and slabs, removing the material from the furnace, and its rough application to a substructure usually takes several man-days. "This tedious, time-consuming manual work has now come to an end", says Udo Tartler, Managing Director of the TARTLER GROUP, and continues: "With our new Clay Application Machine CAMA 01, we offer model makers and industrial designers an innovative complete system for the fast and process-safe application of mould making plasticine. This enables them to largely semi or even fully automate their clay styling and clay pasting".

The TARTLER GROUP's new clay application machine is a slim system solution consisting of a manual or automatic feed, a temperature-controlled pump unit and a dosing line with an application nozzle. The system is operated via a control system with a touch screen. The clay is discharged very evenly, with a constant material temperature and an output of up to 1.2 kg/min in the standard version of the CAMA 01. To optimise the application, different nozzles can be used and the output quantity can be individually controlled. All important parameters of the application process are logged.

Compared to conventional clay modelling methods, the new CAMA 01 saves the user an enormous amount of time and makes the entire application process a very controlled and clean affair. In addition, Udo Tartler has already announced its next bigger counterpart, the CAMA 02, whose development is nearing completion: "With an output of over 3.0 kg/min, we are generating even more optimisation potential for our customers," says the company boss.

What the TARTLER GROUP and its subsidiary company SOMATA is offering model makers and designers with this new clay application machine is the innovative result of a development project dating back almost two years, which incorporated the plant manufacturer's entire wealth of expertise in fluid technology from the production of automated synthetic resin dosing and mixing systems. On the basis of this engineering experience acquired over numerous decades, the SOMATA also decided to offer the CAMA 01 in the basic version as a semi-automatic and very easy-to-operate system that can also be connected to handling devices and robots.

In the future, the user will be able to carry out both manual and fully automated clay application with one system. "The respective interfaces are already provided and an automated refilling unit is already in the pipeline," emphasises Udo Tartler.

With this design, the new Clay Application Machine from the TARTLER GROUP should make it easy for many industrial designers and model makers to say goodbye to manual clay application. A first impression on what it's like to work with the CAMA 01 is given in a recently released video on SOMATA's website (https://www.somata- gmbh.com/en/#clayvideo).