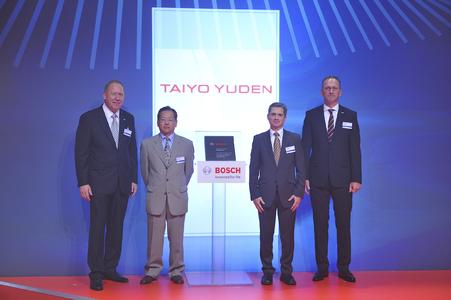 (PresseBox) ( Tokyo, 11-07-21 )
Tokyo – Taiyo Yuden Co. Ltd. has been presented with the Bosch Supplier Award in the Electronics and Electromechanical category. The Bosch award recognizes companies that have performed particularly well in manufacturing and supplying products or services over the past two years – especially in terms of quality, pricing, reliability, technology, and continuous improvement. “The Bosch Supplier Award goes to outstanding suppliers who play a key role in the Bosch Group’s success and work with Bosch on the ongoing further development and improvement of products and manufacturing processes,” said Franz Fehrenbach, chairman of the board of management of Robert Bosch GmbH, at the presentation ceremony on July 19, 2011 at Stuttgart’s Alte Reithalle.

Bosch confers its global supplier award every two years. This is the 12th time it has been presented since 1987. There were no awards in 2009 due to the global financial and economic crisis. A total of 60 suppliers from 14 countries received an award in one of seven categories. This is the first time that Taiyo Yuden Co. Ltd. has won the Bosch Supplier Award.

In 2010, the Bosch Group’s total purchasing volume came to some 24 billion euros. The proportion of this sum generated outside Germany came to around 60 percent. China accounted for the largest purchasing volume outside Germany, followed by eastern Europe, the United States, and Japan. Bosch’s “shopping list” includes manufacturing materials such as electronic, mechanical, and electromechanical components, as well as merchandise, operating resources, services, and machinery.

The Bosch press release about the Supplier Award and a list of all the award-winning suppliers are available from the Bosch Media Service at www.bosch-presse.de.