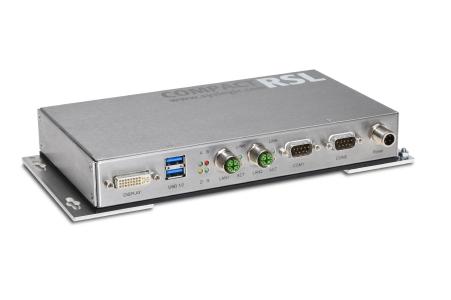 (PresseBox) ( Waldshut-Tiengen, 16-07-19 )
In September, InnoTrans, the world's largest railway trade fair, will take place in Berlin. The embedded specialist Syslogic will again be present as an exhibitor. Syslogic is supplementing its portfolio of data loggers and control computers with a CMOS camera for railway applications and a time-of-flight sensor for monitoring seat occupancy in public transport.

The embedded specialist Syslogic is supplementing its railway portfolio just in time for the railway trade fair InnoTrans, which will take place in Berlin from
20–23 September 2016. In Berlin, Syslogic will show the refined railway computers, which are suitable as data loggers, PIS computers (passenger information system), control computers or network video recorders. Two new developments will be on display for the first time. Firstly is a CMOS industrial camera, and secondly, a time-of-flight sensor for monitoring seat occupancy in public transport.

Continuously developed EN50155 Railway Computer
Syslogic can look back on over 20 years of experience in the railway market. The company has been continuously developing and expanding its portfolio of EN50155-certified railway computers in recent years. The railway computers are used around the world by renowned manufacturers, such as Alstrom, Bombardier, Siemens and Stadler Rail. They are used as data loggers, PIS computers (passenger information system), control computers or network video recorders.

The railway computers from Syslogic are developed for rolling stock use. They feature a galvanized, separate storage input and have threaded M12 plugs in order to meet the strict requirements of the railway. In addition, the railway computers are designed for current on-board train power-supply voltages. They permit supply voltages of 16.8 to 72 volts DC, optionally also 110 volts. In addition, Syslogic integrates an uninterruptible power supply S2 according to the requirements of the railway standard EN50155. All railway computers are fan-free, maintenance-free and certified for expanded temperature ranges of –40 to +85 degrees Celsius. For position determination and data transfer, the railway computers can be equipped with GPS and LTE/GSM/UMTS functions. With versatile interfaces such as RS232, RS422/RS485, CAN and Ethernet, a flexible system connection is also possible. The connection to typical railway BUS systems, such as TCM or MVB, occurs via optional enhancement cards, which can easily be integrated. At InnoTrans, Syslogic will be displaying a broad range of railway computer products. As a manufacturer with its own production, including SMD placement, Syslogic is specialized in build-to-order devices, even for small quantities.

In addition to the constant development of the railway computer, Syslogic has also advanced other railway products. To be seen for the first time in Berlin will be a panel computer suitable for railways, a CMOS industrial camera and a time-of-flight sensor.

Touch panel computers for railway application
Syslogic has adapted its panels from the PCT series (Projected Capacitive Touch) for use in rail vehicles. In the new panel computers, the LAN interfaces and the power supply have screw-on M12 plugs. In this way, the current railway standards regarding shocks and vibrations, such as EN61373: 2011-04 and EN60068-2-27: 2009 are met.

Industrial monitoring and reverse cameras for the railway sector
The Syslogic camera builds on the latest CMOS technology (complementary metal-oxide semiconductor) and combines the advantages of analog cameras with those of digital cameras. The CMOS industrial camera provides an analog CVBS signal in a high image quality with a short latency time, optionally in PAL or NTSC format.

The camera firmware integrates image correction algorithms, such as lighting and color correction, rectification (dewarping) or pan-tilt zoom. Furthermore, the camera allows for graphic overlays, a feature that was previously reserved for digital cameras. The Syslogic camera provides very good images, even in difficult lighting conditions, thanks to the HDR characteristics.

The CMOS industrial camera, like all products from Syslogic, meets high requirements for durability and long-term availability. It was designed for mobile applications and is suitable for rail vehicles. Possible applications include monitoring the front or rear area or monitoring the ramps.

The CMOS industrial camera will also be used in retrofit projects – as a one-to-one replacement for obsolete analog cameras or analog cameras that are no longer available. It can be installed in the existing camera housing. Thanks to the new features of the CMOS camera, old systems can be supplemented with new features. The analog industrial cameras from Syslogic are available in three different types of housing as well as in a board solution for OEMs. They are all easy to assemble and have a simple system integration.

Detecting the seat occupancy using TOF technology (Time of Flight)
The TOF system (Time of Flight) from Syslogic is also making its premiere. This is used to detect seat occupancy in public transport. The compact TOF camera will be mounted above the row of seats. The camera sends infra-red light pulses to the seat and, for each pixel, it measures the time that the light needs to get to the object and back again. This is how the seat is scanned. Using software that Syslogic developed together with established technical universities, the system detects whether anyone is really sitting in the seat or whether, for example, only a bag has been placed on the seat. Accordingly, the utilization of a bus or train can be determined or, respectively, which compartments still have seats available can also be determined. A possible application would guide travelers to the carriages with available seats while they are already on the platform.

The advantages of the TOF technology lie in the speed compared to conventional systems, since the row of seats does not have to be scanned first. The TOF camera measures with 16 pixels. Another advantage compared to other technologies is that TOF manages without moving parts and is accordingly sturdy. TOF also works in extreme light conditions. Compared to video systems, TOF does not record any image data, but rather only records outline data of a measured object. There are accordingly no concerns about data privacy. The Syslogic TOF sensors can be coupled with different BUS systems.

Florian Egger, sales manager at Syslogic, says: "The railway market has become one of the main pillars for us." Thanks to the new product category of Vision Systems, Syslogic can now offer its customers a more comprehensive product range than before, says Egger.

Syslogic is a provider of industrial computers, embedded PCs, single-board and touch panel computers for sophisticated industrial applications in areas such as machinery and vehicle construction as well as transport and railway engineering. All embedded PC and touch panel computers are completely developed and manufactured in Europe. For over 25 years, Syslogic has been developing tailor-made and robust embedded systems with long-term availability. In addition to standard product support, Syslogic also offers its customers professional technical project monitoring. www.syslogic.de

Um Anwendern mehr Freiheit zu geben und mehr Reparaturmöglichkeiten für Hardware zu eröffnen, wurde DIN SPEC 3105 geschrieben. Das Ziel: Hardware-Baupläne und andere Informationen sollen kostenlos ins Web – genau wie die Norm selbst. read more
The publisher indicated in each case is solely responsible for the press releases above, the event or job offer displayed, and the image and sound material used (see company info when clicking on image/message title or company info right column). As a rule, the publisher is also the author of the press releases and the attached image, sound and information material.
The use of information published here for personal information and editorial processing is generally free of charge. Please clarify any copyright issues with the stated publisher before further use. In the event of publication, please send a specimen copy to service@pressebox.de.