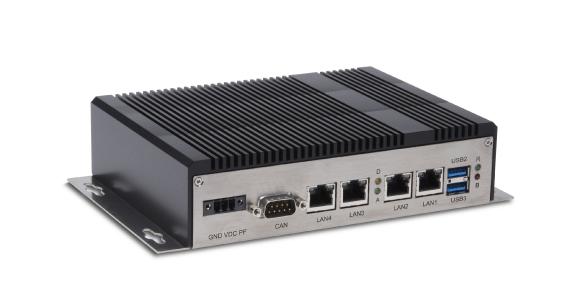 (PresseBox) ( Waldshut-Tiengen, 18-11-12 )
AI (Artificial Intelligence) is not only needed in the cloud, but increasingly also locally (decentralized). The embedded specialist Syslogic responds with an AI Embedded Computer. The new device will celebrate its premiere at “SPS IPC Drives” in Nuremberg.

From November 27 to 29, 2018, the SPS IPC Drives trade show will once again be held in Nuremberg. Syslogic, a specialist in industrial computers and HMI systems, will be showcasing its brand new AI Embedded Computer at the Industrial Automation trade show.

While AI used to be mostly used in cloud systems, it is now increasingly needed in decentralized systems. Data must be evaluated on-site to allow for decisions to be made instantly. Applications in autonomous or semi-autonomous vehicles cannot wait for results from the data center. Furthermore, an edge computer does not always have connection to a cloud, especially in vehicles. However, it is also clear that the artificial intelligence of entire data centers cannot be managed with low-power embedded systems. Accordingly, edge computers perform limited functions. The resource-intensive calculations take place downstream in the cloud.

The new AI Embedded Computer by Syslogic is therefore suitable for all applications in which edge computing and Artificial Intelligence coincide. Typical application areas are the AI subareas Machine Vision, Intelligent Control and Deep Learning.

Nividia GPU as a platform for the AI Embedded Computer
Syslogic uses a Jetson TX2i module by Nvidia as the basis for the AI Embedded Computer. This module features an economical but powerful quad-core processor platform. The core of the Jetson TX2 is the ARM SoC Tegra X2 named Parker. It combines two computation modules with Nvidia's proprietary Denver 2 microarchitecture with four Cortex-A57 cores and a Pascal GPU. The latter has 256 shader cores.

Besides the actual processor platform Nvidia especially stands out with the JetPack development kit, which contains CUDA libraries, programming interfaces and examples. In addition, Syslogic delivers its AI Embedded Computer with preinstalled Ubuntu Board support package. This facilitates getting started in AI applications.

AI meets proven industrial virtues
Syslogic combines modern processor technology with the tried and tested virtues of their embedded systems. Robustness, durability and long-term availability are values that Syslogic holds very high. The AI Embedded computers are fanless and maintenance-free. This makes them suitable for operation in temperature ranges from -40 to +70 degrees Celsius.

For system connection, the AI computer features a flexible interface layout and WiFi, GPS and LTE functions can be added.

Syslogic is currently providing their AI hardware platform as prototypes. The first few applications will soon be tackled with existing customers. Florian Egger, Head of Sales at Syslogic, says: “We are convinced that with the AI embedded computers we have the finger firmly on the pulse.” According to Egger, Syslogic wants to help shape the future of automation. Moreover, the Syslogic hardware engineers are already working on an AI box PC with the new Nvidia Xavier platform.

Syslogic supplies industrial computers, embedded PCs, single board computers and touch panel computers for demanding industrial use. These devices are used in areas such as mechanical and automotive engineering as well as traffic and train technology.

Deutsche Unternehmen finden sich laut einer aktuellen Umfrage des Branchenverbandes Bitkom zu abhängig von ausländischen Digitalimporten. Der Verband konstatiert deswegen fehlende digitale Souveränität und fordert statt freier Marktwirtschaft staatliche Initiativen. read more
The publisher indicated in each case is solely responsible for the press releases above, the event or job offer displayed, and the image and sound material used (see company info when clicking on image/message title or company info right column). As a rule, the publisher is also the author of the press releases and the attached image, sound and information material.
The use of information published here for personal information and editorial processing is generally free of charge. Please clarify any copyright issues with the stated publisher before further use. In the event of publication, please send a specimen copy to service@pressebox.de.