Embedded Computer and HMI Systems made in Europe 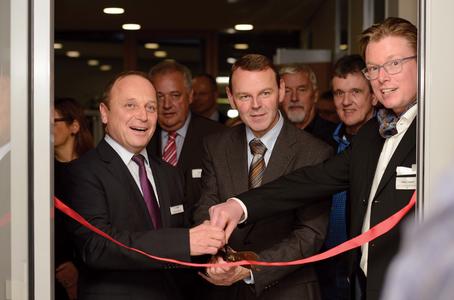 (PresseBox) ( Waldshut-Tiengen, 15-01-07 )
On December 5, 2014, the European embedded specialist Syslogic opened its new manufacturing site in Bannewitz, near Dresden. The opening celebration included guests from politics and business. Syslogic is particularly hoping to expand its market position in Germany with the new site.

The embedded specialist Syslogic is further expanding its presence in Germany.

It dedicated its new location in Bannewitz, near Dresden, with a large opening celebration on December 5, 2014. Over 100 guests joined, including customers, partners, representatives of the press and high-ranking personalities from business and politics.

Germany is one of Syslogic's most important markets. With the new factory, it is expanding its presence in there. Christian Binder, Syslogic CEO, says: "The new location in Bannewitz is strategically important for us. The new plant in Sachsen allows Syslogic to implement customized modifications faster than hitherto. In addition, it is increasingly reaching its capacity at the existing sites in southern Germany and Switzerland, thanks to the good volume of orders."

A technology center is emerging in Bannewitz

In addition to manufacturing, the areas of product qualification, internal sales and quality management are being expanded in Bannewitz. Various areas of development are also to be located at the new site and combined into a technology center. That includes the train sector as well as video technology and pedestrian flow analysis.

The new plant allows Syslogic to not only increase its capacity but also the certainty of supply. Thanks to an additional, decentralized, warehouse, the company can guarantee high supply certainty. The Bannewitz plant is, in addition, certified according to ISO 9001:2008, as are all Syslogic Group sites.

This lets the company ensure high quality across the group.

The new building in Bannewitz includes a hall with a modern assembly line, a warehouse and an office wing. The new building has a total usable surface of 1000 square meters. The local architect, Zimmer Gruhl GbR, was entrusted with the planning and implementation of the project.

Syslogic CEO Christian Binder says: "We have been in operation since December 1." In 2015, Syslogic will start up in earnest and begin with new hiring at the new site.