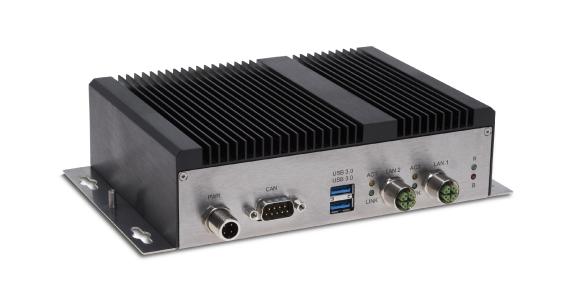 With the AI (Artificial Intelligence) Railway Computer, safety and cost-effectiveness in the railway sector can be improved. This is equally interesting for railway operators as it is for rail vehicle manufacturers. The AI Railway Computer is used wherever AI and edge computing intersect. Typical applications include semi-autonomous driving, predictive maintenance and condition-based monitoring. Syslogic is currently supplying the first product-quality samples for test purposes and will soon start series production.

AI Performance Meets EN50155
Syslogic uses a Jetson TX2 module by Nvidia as the basis for the AI Rail Computer. The core of the Jetson TX2 is the ARM SoC Tegra X2 named Parker. It combines two computation modules with Nvidia's proprietary Denver 2 microarchitecture with four Cortex-A57 cores and a Pascal GPU. The latter has 256 shader cores. This enables the AI Embedded System to use artificial intelligence in real time.

The innovative processor technology combines Syslogic with the tried and tested features of existing railway computers. For example, the AI Railway Computer is passively cooled, features a robust housing and screw-on M12 connectors. Thus, the AI Railway Computer complies with railway standard EN50155, class OT4, as well as fire protection standard EN45545. Furthermore, the railway computer has a galvanically isolated nominal power supply of 24/36 and optionally up to 110VDC.

Easy Commissioning Thanks to Pre-Installed Developer Environment
Besides performance and robustness, Syslogic is also focusing on easy commissioning of the AI Embedded systems. The devices come with pre-installed Ubuntu board support package (Linux for Tegra). Additionally, a complete developer environment (JetPack) including CUDA libraries is installed. The Nvidia software development kit (SDK) and a deep learning framework are available for a quick introduction to the AI world.

Product-Quality Preproduction Samples Available
Currently, Syslogic is supplying product-quality pre-production devices for testing purposes to interested customers. The series production of the AI Railway Computers will start shortly. At the same time, Syslogic is already working on an AI box for industrial automation and on a device based on the Jetson Xavier platform. Like the Jetson TX2 platform, it is supplied by Nvidia.

Florian Egger, Sales Manager of Syslogic, says: “We provide our customers with the hardware platform to become part of the AI revolution for the railway sector.” As usual with Syslogic, the AI Railway Computers are manufactured in Syslogic's own factories in Europe.

Syslogic supplies industrial computers, embedded PCs, single board computers and touch panel computers for demanding industrial use. These devices are used in areas such as mechanical and automotive engineering as well as traffic and train technology. All embedded PCs and touch panel computers are fully developed and manufactured in Europe. Syslogic stands for more than 30 years of customized, robust and durable embedded systems. In addition to traditional product support, Syslogic offers its customers expert technical project support. www.syslogic.de

Sicherheit, Stabilität, Skalierbarkeit sowie einfache Verwaltung stehen ganz oben auf der Prioritätenliste eines jeden Speicherarchitekten, wenn es darum geht, Technik auszuwählen, die ein individuelles Ökosystem unterstützt und dabei den heutigen geschäftlichen Herausforderungen gerecht wird. read more
The publisher indicated in each case is solely responsible for the press releases above, the event or job offer displayed, and the image and sound material used (see company info when clicking on image/message title or company info right column). As a rule, the publisher is also the author of the press releases and the attached image, sound and information material.
The use of information published here for personal information and editorial processing is generally free of charge. Please clarify any copyright issues with the stated publisher before further use. In the event of publication, please send a specimen copy to service@pressebox.de.