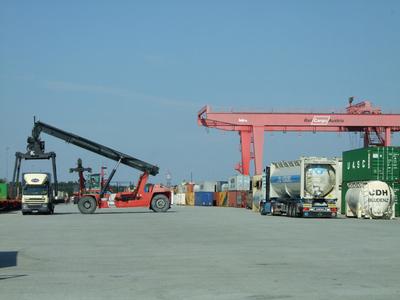 (PresseBox) ( Neubiberg, 10-05-20 )
Rail Cargo Austria (RCA) has fitted their Wels container terminal with a complete sensor equipment solution from Symeo. The solution includes all components for D-GPS based position detection of reach stackers and gantry cranes as well as for load detection on the units' spreaders. Now RCA is planning to roll out Symeo sensor equipment step by step in all terminals that they have in operation.

After successful completion of pilot operations at the Wels terminal location of Rail Cargo Austria (RCA) plans have consecutively been made to fit all RCA's terminals with Symeo's positioning systems. A technology provider specialising in radio based solutions for distance measurement, position detection and anti collision, Symeo will be providing an integrated solution composed of radio based D-GPS positioning for vehicles and cranes and load recording sensors used for container detection on the spreaders and connected by ZigBee close range wireless links.

While this system breaks new ground in many respects, Rail Cargo Austria, the terminal operator, Symeo, onestopshop for the stateoftheart sensor solution, and Vienna based SCOPE Consulting Unternehmensberatung, supplier of the terminal's IT system, succeeded in meeting all RCA's requirements in the best possible way through close cooperation.

A particular advantage of the elaborated solution lies in its scalability and extendibility. It can be deployed on sites of any size and independently of vehicle and crane type and, when upgraded with Symeo LPR®, can also be used in areas that cannot be reached by GPS signals. "The Symeo positioning system is working very reliably at the Wels terminal", Erich Possegger from Rail Cargo Austria states. "Apart from the systems' ruggedness, Symeo's expertise in elaborating a new solution exactly to meet our requirements was very convincing for us. Furthermore, by combining the GPS solution with LPR, Symeo succeeds in ensuring reliable position detection even in areas where no GPS signals can be received."

In 2004, Vienna based Rail Cargo Austria AG was established by the Austrian Railways (Österreichische Bundesbahnen - ÖBB) as a selfcontained spinoff of their rail cargo department and it is part of the ÖBB group. Since then, the company has grown into an international logistics group with manifold activities. Annually, the highly structured enterprise moves about 90 million tonnes of goods and generates some 2.5 billion euros of revenue, about 2 billion of which from actual freight transport. Rail Cargo Austria operates a total of 18 intermodal container terminals domestically and abroad for cargo transit between rail and road.

Symeo develops and markets products and solutions enabling accurate and contactless position detection for vehicles, cranes, and objects, for distance measurement, as well as anticollision systems. Symeo's products are of robust design and are suited for applications in rough industrial environments.

The company provides system integrators, original equipment manufacturers (OEMs), and users the world over with standard products and complete solutions.