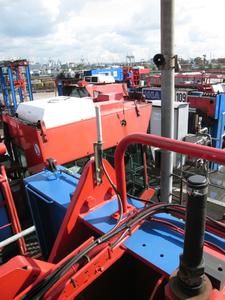 (PresseBox) ( Neubiberg, 10-05-03 )
The container transportation vehicles at the Burchardkai Container Terminal at the Port of Hamburg are to be equipped with the Local Positioning Radar (LPR®) from Symeo GmbH. The terminal operator has just signed a delivery contract with Symeo. In the leadup to the deal, extensive tests were conducted in which the system exceeded the expectations of the operator. Symeo's wireless sensor system is a comprehensive positioning system used to monitor the movement of all of the containers in the terminal and replaces an older system to achieve significant improvements in the container handling efficiency at the Burchardkai.

The Burchardkai Container Terminal owned by Hamburger Hafen und Logistik AG (HHLA) is the largest and oldest operation of its kind at the Port of Hamburg. Twentyseven shiptoshore cranes load and unload up to 5,000 ships each year and, within the next few years, the handling capacity is expected to double thanks to the modern anchorage for large ships and the automated block storage system.

Currently, around 110 van carriers and seven reach stackers are used to transport the containers around the terminal site, but the reach stackers work exclusively in the empty container area. The terminal operator is now planning to gradually equip the entire fleet of 6- to 12 mhigh vehicles with LPR systems in successive stages. This will help the operator to determine the exact position of the containers in the terminal.

Symeo's LPR solution uses wireless technology, which enables it to work independently of weather and visibility conditions and means that it is not affected by dirt or dust. The new LPR system enables the operator to determine the precise position of all vehicles in all areas of the terminal, especially in transfer areas to the new automatic storage system. In addition, with the new system, the height of the vehicles plays no role in system operation. The old laser system was only able to process vehicles of the same height. Also, the laser devices were getting older and were increasingly causing maintenance and repair costs. The Symeo LPR units have no moving parts, making them practically maintenancefree.

In addition, a problem with the existing DGPS receivers was that the signals from the GPS satellites were shadowed by tall nearby structures such as container stacks, ships and, in particular, shiptoshore cranes. For this reason, the system was unable to supply reliable GPS positioning data in the transfer area to the automatic storage area. Unlike the previous system, the Symeo system can securely cover even difficult areas, since the fixed transponders are suitably distributed across the entire terminal site.

The LPR system was subjected to extensive testing at the container yard , in the areas under the ship to shore cranes, the transfer area to the automatic storage area, the empty container storage area and on straddle carriers of different heights. The system met expectations in every area. The goal was to ensure that the system was highly reliable and able to track the position of containers with an accuracy of ±1 m. Over the course of the 14week test, the LRP system presented the operator with an availability of 99.2% and a positioning accuracy of up to ±20 cm.

Symeo develops and markets products and solutions enabling accurate and contactless position detection for vehicles, cranes, and objects, for distance measurement, as well as anticollision systems. Symeo's products are of robust design and are suited for applications in rough industrial environments.

The company provides system integrators, original equipment manufacturers (OEMs), and users the world over with standard products and complete solutions.