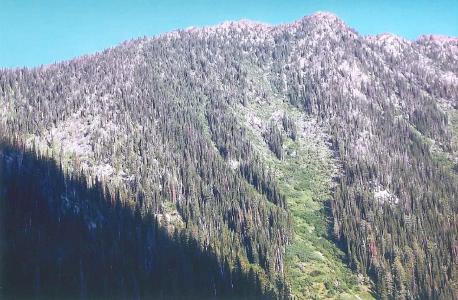 Photo of mountain where helicopter-supported drilling is about to start at Wild Horse property.

The Company is excited  that in conjunction with one of the property vendors, a helicopter-supported drill program is about to start on one of the claims recently acquired at Wild Horse Creek.  Drilling is planned to follow-up previous drill results that returned high gold values.  In 2016, drill hole LF16-01 was drilled to test a gold target on the Lone 4 claim that was defined by surface rock chip sampling. Surface grab sample results were reported with values ranging up to 8.0 grams per tonne.  Hole LF16-01 was drilled to test beneath the gold-bearing outcrops and intersected altered sedimentary rocks cut by quartz veinlets and breccia mineralized. with disseminated pyrite. This historic hole was stopped in the mineralized zone due to the onset of winter.  Historical assay reports indicate consistently elevated gold values between depths of 60.0 meters and the end of the hole at 74.4 meters, essentially underneath the mineralized zone at surface.   A drill intercept of 0.76 grams per tonne gold over 14.4 meters was obtained.  Included in this are 3 meters grading 2.48 grams per tonne gold, with values ranging up to 3.26 grams per tonne gold over 1.0 meters.

A drill has been mobilized to site now and is being set up on the site where the 2016 hole was collared.  The plan is to go back down the 2016 hole and extend it to further drill and define the boundary of the mineralized zone.

The Wild Horse Creek property lies within the Kimberley Gold Trend, a zone that extends southwestward from the Rocky Mountains into the western part of the Purcell Mountains.  Since 1864 when gold was first discovered in Wild Horse Creek more than 10 million ounces of gold is estimated to have been recovered from the streams in the East Kootenay’s and placer gold mining continues around Cranbrook. (Seabrook and Hoy, 2015 Geoscience BC Roundup Poster).  The Wild Horse Creek Property covers potential source areas for the famous placer gold deposits, as well as several polymetallic silver-gold-lead-zinc and gold-quartz vein prospects.

Ximen Mining Corp. owns 100% interest in three of its precious metal projects located in southern BC.  Ximen`s two Gold projects The Amelia Gold Mine and The Brett Epithermal Gold Project. Ximen also owns the Treasure Mountain Silver Project adjacent to the past producing Huldra Silver Mine.  Currently, the Treasure Mountain Silver Project is under a option agreement. The option partner is making annual staged cash and stocks payments as well as funding the development of the project. The company has also acquired control of the Kenville Gold mine near Nelson British Columbia which comes with surface and underground rights, buildings and equipment.