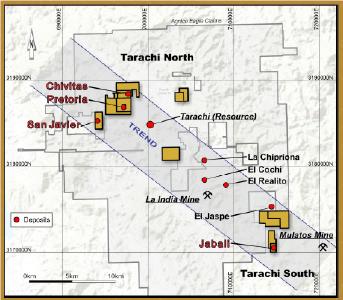 Mapping and detailed underground channel sampling at the La Dura area of the southern Jabali concession has been completed. Initial fire assays returned high-grade results over significant widths including 6.34 g/t gold over 62.55 metres in La-Dura-01 including a sub-interval of 42.65 g/t gold over 2 metres. The sampling program was intended to test and expand on historic results as well as outline initial drill targets. A total of 91 rock-saw channel samples were submitted to BV Laboratory in Hermosillo. Samples were taken at the best available underground exposures roughly perpendicular to the mapped East-West striking breccia structures.

Previous exploration and drilling on Jabali had been based on a north-south interpretation of the mineralized structures. While regionally there is a northerly trend, recent detailed mapping by Tarachi’s geological team has identified a series of steeply dipping east-west striking crackle breccias which locally control the high-grade gold mineralization.

Tarachi’s President and CEO, Lorne Warner CEO comments “We are very pleased to announce this impressive sampling intercept of 62.55m at 6.34 g/t gold. These high-grades over broad widths demonstrate the immense potential of the Tarachi project. Additionally, the reinterpretation of the steeply dipping breccias featured at La Dura creates a significant opportunity for Tarachi to drill the historic mine area in a brand-new way. With over C$10 million in the bank and these initial high-grade results, I believe the Company is in an excellent position to deliver value through exploration.”

Results are detailed in the chart below:

The Company expects to announce further sampling results in the near term and is preparing to begin drilling. The Tarachi project is host to multiple high-grade gold targets and the Company will announce details surrounding its drill campaign shortly. An exploration camp has been erected in the Tarachi area and stringent Covid-19 protocols have been put in place to ensure the safety of local communities and the team in the field.

All channel rock samples were taken underground in the La Dura mine on the Jabali concession using a Husqvarna K770 14-inch gas powered disc saw. Two cuts were made about 5cm apart then a continuous channel of rock between the cuts was removed with a hammer and chisel. Samples varied in length between 0.4m and 1.25m. Sample tags were submitted into each bag before being sealed and stored at the campsite in a secure area and were later transported by company truck directly to the Company to Bureau Veritas Mineral Laboratories (BVM) in Hermosillo, Sonora, Mexico. At the laboratory the samples were dried, crushed and pulverized with the pulps being sent airfreight for analysis to BVM in Vancouver, B.C. for 37-element ICP analysis after modified aqua regia digestion. Gold assays are done in Hermosillo by 50-gram fire assay with an atomic absorption spectroscopy finish.

Samples were checked using a 50-gram fire assay with a gravimetric finish for samples greater than 10ppm Au and 1Kg metallic fire assay with duplicate minus fraction analyzed. Both Hermosillo and Vancouver BVM facilities are ISO 9001 and ISO/IEC 17025 accredited.  Laboratory control samples comprising certified reference samples, duplicates and blank samples were inserted by the laboratory into the sample stream and analyzed as part of the quality assurance/quality control protocol.

The Projects consist of the San Javier, Pretoria, Chivitas, Jabali, Juliana, Texana and Tarachi concessions for at total of 2,560 hectares in the prolific Mulatos gold belt. The Projects are approximately 220 km by air east of the City of Hermosillo, and 300 km south of the border between the United States of America and Mexico. The Jabali claim covers the La Dura historic mine and several other small-scale mines. The gold mineralization and geology at Jabali is believed to be similar in character to the gold mineralization at the Mulatos mine. Alamos Gold Inc., in a 2003 annual report, identifies the Jabali project as being part of the "Los Bajios" mineralized trend which the report suggests has the potential to host another Mulatos size resource. The Tarachi project is an early stage exploration project and the mineralization hosted on adjacent and/or nearby properties is not necessarily indicative of mineralization hosted on the Company’s property.