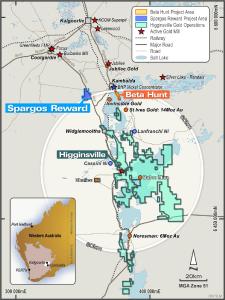 Paul Andre Huet, Chairman and CEO, commented "The potential addition of a near term high-grade open pit gold project such as Spargos Reward, which is located close to our Higginsville treatment plant, is a very compelling opportunity. In our view, Spargos Reward has the potential to be fast tracked into our growing production pipeline and generate substantial cash flow with little risk to RNC and its shareholders. Importantly, the sale and purchase agreement structure allows RNC an exclusive window during which to conduct a thorough due diligence program over the next three months before making a decision to close the transaction."

Mr. Huet added “For months we have been aggressively working on reducing our costs in Western Australia. In fact, we have already made tremendous progress restructuring several legacy issues that we inherited on the acquisition of our Western Australian properties. The addition of the Spargos Reward project would have the potential to further that progress by improving our per ounce cost structure across our operations. As always, our shareholders can expect us to continue to aggressively focus on reducing costs, with an AISC target of US$1,000 per ounce sold by the end of 2020.

The historical high grades at Spargos Reward exceed those at both of our existing Beta Hunt and HGO gold operations and could provide a higher margin source of feed to our Higginsville treatment facility. This should also allow us to be more selective in our mining at Beta Hunt and Higginsville. Spargos Reward is the same distance as Beta Hunt from our mill. We expect the due diligence process to confirm that these will be higher margin ounces for our shareholders.

Overall, pending due diligence and regulatory and third-party approvals, we view this project as having the potential to be a very accretive addition to our Western Australian portfolio, boosting our operational flexibility. We look forward to closing the acquisition in the coming months.”

The information is extracted from the report entitled 'Resource Estimate Update for Spargos Reward Project Eastern Goldfields Western Australia’ dated on February 26, 2020 and is available to view on Corona Resources LTD’s website (www.coronaresources.com.au). RNC confirms that the form and context in which the Competent Person's findings are presented have not been materially modified from the original report. A qualified person has not done sufficient work on behalf of RNC to classify the historical estimate noted here and in Table 1 as current mineral resources or mineral reserves and RNC is not treating the historical estimates as current mineral resources or mineral reserves. There is no certainty they will prove to be accurate or that a range of outcomes will be achieved.

The Spargos Reward project includes tenures covering 33 square kilometres located in the Eastern Goldfields of Western Australia, just 65 kilometres north of RNC’s Higginsville treatment facility by road. The project’s historical resource, which RNC understands includes a planned (by the existing owner) high grade (+3 g/t Au) open pit, lies entirely within a mining tenement which covers sufficient area to accommodate the infrastructure necessary to mine  mineralized material.3 As an advanced exploration project, there are already a significant number of areas flagged for further exploration and development, with the potential to rapidly advance open pit and underground mining.

3. See news release of Corona Resources Ltd. - “Corona Completes Positive Scoping Study at the Spargos Reward Gold Project” dated 14 November 2018 (at coronaresorces.com.au). RNC has not done sufficient work to independently verify this information, and there is no certainty that this will be achieved or that a range of outcomes will be achieved.

There are a number of historic workings within the project, most notable of which is the historic Spargos Reward Gold Mine which produced 105,397 tonnes at an average grade of 8.56 g/t Au in the 1930s and 1940s1, with limited gold extraction since that time. Since, the mid-1980’s exploration work has significantly extended the mineralization with drilling now consistently intersecting high grade mineralization over an area of 250 metres long by 500 metres deep and remaining open at depth.1

Under the terms of the sale and purchase agreement RNC will make a non-refundable payment of A$25,000 payable on signing for an exclusive three-month period to complete due diligence.

Settlement of the acquisition will be conditional on the satisfaction of certain conditions precedent, including satisfactory due diligence, receipt of all necessary regulatory approvals and third-party consents.

On closing, RNC would be required to pay A$4 million, satisfied at RNC’s election in cash, RNC shares, or a combination of cash and shares. RNC would be subject to a minimum spending commitment of A$2.5 million on exploration and development at the Spargos Reward project during a two-year period post-closing. The seller would be entitled to an additional (i) A$1.5 million in RNC shares on commencement of gold production at the Project, and (ii) A$1.0 million in RNC shares if a new additional indicated gold resource of at least 165,000 oz is delineated at the Project.

RNC is also pleased to announce a proposed name change to Karora Resources Inc. (“Karora”), to be voted on by shareholders at its virtual Annual General and Special Meeting to be held on June 11, 2020. RNC’s board of directors and management believes that the time is right to re-brand the Company to more accurately reflect its business focus as a growing, profitable gold producer in Western Australia - the Fraser Institute’s top ranked mining jurisdiction for investment worldwide in 2019.  While the Company continues to advance its gold producing operations in Western Australia, it also remains focused on delivering strong shareholder value via its 28% ownership in the Dumont Nickel Project located in Quebec.

The disclosure of scientific and technical information contained in this news release has been reviewed and approved by Stephen Devlin, FAusIMM ,Vice-President, Exploration & Growth, Salt Lake Mining Pty Ltd, a 100% owned subsidiary of RNC, a Qualified Person for the purposes of NI 43-101.

RNC is focused on growing gold production and reducing costs at its integrated Beta Hunt Gold Mine and Higginsville Gold Operations ("HGO") in Western Australia. The Higginsville treatment facility is a low-cost 1.4 Mtpa processing plant which is fed at capacity from RNC's underground Beta Hunt mine and open pit Higginsville mine. At Beta Hunt, a robust gold mineral resource and reserve is hosted in multiple gold shears, with gold intersections along a 4 km strike length remaining open in multiple directions. HGO is a highly prospective land package totaling approximately 1,800 square kilometres. In addition, RNC has a 28% interest in a nickel joint venture that owns the Dumont Nickel-Cobalt Project located in the Abitibi region of Quebec. Dumont contains the second largest nickel reserve and ninth largest cobalt reserve in the world. RNC has a strong Board and management team focused on delivering shareholder value. RNC's common shares trade on the TSX under the symbol RNX. RNC shares also trade on the OTCQX market under the symbol RNKLF.

This news release contains "forward-looking information" including without limitation statements relating to the liquidity and capital resources of RNC, production and AISC guidance for 2020, the potential of the Beta Hunt Mine, Higginsville Gold Operation, Dumont Nickel Project and the potential acquisition of the Spargos Reward Gold Project and its production potential. Forward-looking statements involve known and unknown risks, uncertainties and other factors which may cause the actual results, performance or achievements of RNC to be materially different from any future results, performance or achievements expressed or implied by the forward-looking statements. Factors that could affect the outcome include, among others: future prices and the supply of metals; the results of drilling; inability to raise the money necessary to incur the expenditures required to retain and advance the properties; environmental liabilities (known and unknown); general business, economic, competitive, political and social uncertainties; results of exploration programs; accidents, labour disputes, labour and operational disruptions due to the COVID-19 outbreak and other risks of the mining industry; political instability, terrorism, insurrection or war; or delays in obtaining governmental approvals, projected cash operating costs, failure to obtain regulatory or shareholder approvals. For a more detailed discussion of such risks and other factors that could cause actual results to differ materially from those expressed or implied by such forward-looking statements, refer to RNC's filings with Canadian securities regulators, including the most recent Annual Information Form, available on SEDAR at www.sedar.com.

A production decision at the Higginsville gold operations was made by previous operators of the mine, prior to the completion of the acquisition of the Higginsville gold operations by RNC and RNC made a decision to continue production subsequent to the acquisition. This decision by RNC to continue production and, to the knowledge of RNC, the prior production decision were not based on a feasibility study of mineral reserves, demonstrating economic and technical viability, and, as a result, there may be an increased uncertainty of achieving any particular level of recovery of minerals or the cost of such recovery, which include increased risks associated with developing a commercially mineable deposit. Historically, such projects have a much higher risk of economic and technical failure. There is no guarantee that anticipated production costs will be achieved. Failure to achieve the anticipated production costs would have a material adverse impact on the Corporation’s cash flow and future profitability. Readers are cautioned that there is increased uncertainty and higher risk of economic and technical failure associated with such production decisions.