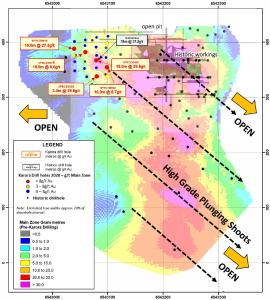 
– Karora Resources Inc. (TSX: KRR) ("Karora" or the “Corporation" - https://www.commodity-tv.com/...://www.commodity-tv.com/ondemand/companies/profil/karora-resources-inc/) is pleased to announce a very strong start to its 12,000 metre drill program at the Spargos Project, with several high grade gold intercepts over broad widths intercepted in mineralization located within and on the margins of the interpreted high grade main zone. The new drill results reported are all within approximately 100 metres of surface and could potentially be included in an expanded open pit scenario.

Paul Andre Huet, Chairman & CEO, commented: “Our exploration drilling program at Spargos is off to a tremendous start. I am thrilled to share our new drill results with the market.

Our first pass exploration drilling aimed at following up on the broad, high grade historical drill intercept  19SPRRC004[1] (37.1 g/t over 18.0 metres) has returned outstanding results that have exceeded our internal expectations. It is not often that these kinds of grades are drilled over such widths this close to surface. I am very much looking forward to our exploration team continuing to test the area.

The results announced today are within and along strike of the main high grade zone already included in the open pit planned by the previous owners of Spargos. The new mineralization we have encountered has identified a potential new plunging shoot which remains open both along strike and down-plunge. We currently have two drills turning on the project with one focused on exploration and one focused on resource definition drilling ahead of our upcoming resource and reserve estimate in December, which will form the basis of an initial mine plan. I look forward to providing additional drill results from Spargos as they become available from our ongoing programs”

The first four lines of the Spargos drill program have now been completed and results received. Drilling to date totals 21 holes for 1,608 metres (Figure 2 highlights the location of recently completed Karora drill holes and historic drill holes). Holes targeted extensions to the southern near-surface margin of the historical mineral resource and successfully confirmed the very high grades intersected in drill hole 19SPRRC004 - 37.1 g/t over 18 metres (62 metres to 80 metres), including 93.1 g/t over 2 metres from 78 metres downhole.

Highlights from the drilling3,4 are listed in order below:

Drilling is ongoing, with the balance of the 12,000 metre Spargos drill program to be completed before the end of the year. Figure 1 illustrates the collar locations of the recent drilling and highlights the potential new north plunging shoot. Further drilling and analysis will be undertaken to validate this theory which could lead to additional parallel shoots.

The Spargos Reward project tenements cover 33 square kilometres, located in the Eastern Goldfields of Western Australia, just 65km north of Karora’s Higginsville mill by road. The project contains an existing historical (JORC (2012) Mineral Resource Estimate[1]. of 112,000 oz (785,800 tonnes @ 4.4 g/t) indicated resource and 19,000 oz (151,000 tonnes @ 4.0 g/t) inferred resource, There are also a number of historic workings within the project, most notable of which is the historic Spargos Reward Gold Mine which produced 105,397 tonnes at an average grade of 8.56 g/t Au in the 1930s and 1940s, with limited gold extraction since that time. Karora acquired the Spargos Reward project in August 2020 (see Karora news release dated August 7, 2020)

The Spargos gold mineralized system is positioned on the contact between meta-greywackes to the east and strongly altered sodic felsic volcaniclastics to the west along a major north trending shear zone which dips steeply to the east. Gold mineralization is hosted in a number of positions with the bulk of the identified mineralization occurring as disseminations and stringer zones of quartz-biotite-amphibole-pyrite-arsenopyrite alteration. The deposit is characterised by the absence of quartz veining.

The gold mineralized zones can be broken down into two key zones - Main Lode and a second West Zone. A review of the historical mine mapping and data indicate high grade mineralization is associated with shallow, north plunging shoots controlled by drag folds recognized along the meta-greywackes and western meta-volcaniclastics contact. The interpreted down-plunge position of high grade mineralization is virtually untested by drilling and represents significant exploration potential to grow the existing historical mineral resource.

As previously outlined in Karora’s news release dated November 9, 2020, a 12,000 metre combined RC and surface diamond drilling program is underway to increase confidence in the existing historical mineral resource and extend known mineralization along strike with the aim of delivering a NI 43-101 compliant mineral resource suitable for the production of a mineral reserve. This reserve will form the basis of an initial mine plan with initial ore expected to be mined at Spargos in the second quarter of 2021.

The disclosure of scientific and technical information contained in this news release has been reviewed and approved by Stephen Devlin, FAusIMM, Group Geologist, Karora Resources Inc., a Qualified Person for the purposes of NI 43-101.

All RC drill sampling is conducted by Karora personnel. Samples for gold analysis are shipped to Bureau Veritas Laboratories of Kalgoorlie and Perth for preparation and assaying by 40 gram fire assay analytical method. All drilling samples submitted for assay include Certified Reference Material (“CRM”) and coarse blank every 25th down hole metre. Duplicate samples are taken every 50th metre. The lab is also required to undertake a minimum of 1 in 45 wet screens on pulverised samples to ensure a minimum 90% passing at -75µm.

Where problems have been identified in QA/QC checks, Karora personnel and the Bureau Veritas laboratory staff have actively pursued and corrected the issues as standard procedure.

Karora is focused on growing gold production and reducing costs at its integrated Beta Hunt Gold Mine and Higginsville Gold Operations ("HGO") in Western Australia. The Higginsville treatment facility is a low-cost 1.4 Mtpa processing plant which is fed at capacity from Karora's underground Beta Hunt mine and open pit Higginsville mine. At Beta Hunt, a robust gold mineral resource and reserve is hosted in multiple gold shears, with gold intersections along a 4 km strike length remaining open in multiple directions. HGO has a substantial historical gold resource and prospective land package totaling approximately 1,800 square kilometers. Karora has a strong Board and management team focused on delivering shareholder value. Karora's common shares trade on the TSX under the symbol KRR. Karora shares also trade on the OTCQX market under the symbol KRRGF.

This news release contains "forward-looking information" including without limitation statements relating to the potential of the Spargos Gold Project, the Beta Hunt Mine and Higginsville Gold Operation.

Forward-looking statements involve known and unknown risks, uncertainties and other factors which may cause the actual results, performance or achievements of Karora to be materially different from any future results, performance or achievements expressed or implied by the forward-looking statements. Factors that could affect the outcome include, among others: future prices and the supply of metals; the results of drilling; inability to raise the money necessary to incur the expenditures required to retain and advance the properties; environmental liabilities (known and unknown); general business, economic, competitive, political and social uncertainties; results of exploration programs; accidents, labour disputes and other risks of the mining industry; political instability, terrorism, insurrection or war; or delays in obtaining governmental approvals, projected cash operating costs, failure to obtain regulatory or shareholder approvals. For a more detailed discussion of such risks and other factors that could cause actual results to differ materially from those expressed or implied by such forward-looking statements, refer to Karora 's filings with Canadian securities regulators, including the most recent Annual Information Form, available on SEDAR at www.sedar.com.>

A production decision at the Higginsville gold operations was made by previous operators of the mine, prior to the completion of the acquisition of the Higginsville gold operations by Karora and Karora made a decision to continue production subsequent to the acquisition. This decision by Karora to continue production and, to the knowledge of Karora, the prior production decision were not based on a feasibility study of mineral reserves, demonstrating economic and technical viability, and, as a result, there may be an increased uncertainty of achieving any particular level of recovery of minerals or the cost of such recovery, which include increased risks associated with developing a commercially mineable deposit. Historically, such projects have a much higher risk of economic and technical failure. There is no guarantee that anticipated production costs will be achieved. Failure to achieve the anticipated production costs would have a material adverse impact on the Corporation’s cash flow and future profitability. Readers are cautioned that there is increased uncertainty and higher risk of economic and technical failure associated with such production decisions.