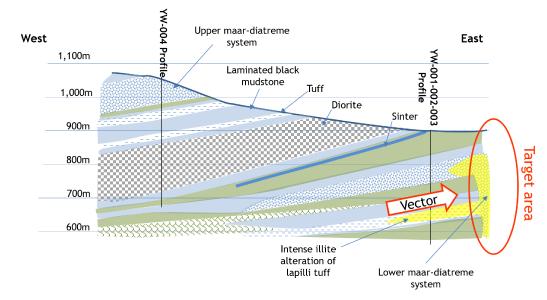 Six drill holes have been completed on Targets A, B and C on the Yawi epithermal gold-silver target area.  Assay results have been received for the first four holes; no significant gold-silver mineralization was intersected.  However, alteration mineral and pathfinder element vectors are being used to refine the target as drilling continues at Yawi (see Figure 1).  In addition, findings at Yawi have refined Aurania’s understanding of its Crunchy Hill target and a target concept has been better defined in the area of the last hole drilled there.

Aurania’s Chairman and CEO, Dr. Keith Barron commented, “The first drill holes at Yawi have provided us with a clear picture of the nature of the epithermal target and we are using vectors evident in the drill core to direct our exploration towards the more prospective parts of the epithermal system.  The maar-diatreme environment we have discovered in core is a well-known environment for epithermal mineralization.  We are focusing on the margins of the column-shaped diatreme pipes identified in the early drilling because these so-called ring fractures are often mineralized.  We also have built enough confidence and knowledge of the subsurface geology to now employ focused geophysics to more accurately direct our drilling.  Aurania is looking into using Controlled-source Audio-frequency Magnetotellurics (CSAMT) that has been used so successfully by Irving Resources to refine their epithermal targets in Japan.”

The drilling has revealed a large maar-diatreme system at Yawi.  Maar-diatremes, as explained in the video “Initial Take on Yawi Drilling” are highly prospective for epithermal gold-silver. To access the video, please click on this link: http://www.aurania.com/initial-take-on-yawi-drilling-video/. Vectors derived from mineral alteration and pathfinder element analyses from the drill core are being used to steer the scout drilling towards the prospective parts of the system.  To this end, hole YW-006 was drilled from the same platform as hole YW-003 on Target B, targeting the hotter part of the hydrothermal system.

The maar-diatreme environment identified at Yawi has helped to refine a target at Crunchy Hill.  The last bore hole drilled at Crunchy Hill in 2019 intersected modest silver mineralization of 4m at 7g/t silver on the margin of a diatreme where alteration and characteristics of the silica associated with the mineralization are indicative of the upper reaches of an epithermal gold-silver vein system.  The target lies on the margin of the diatreme at depth beneath the CH-009 bore hole intercept.  This target could be drilled from the same drill platform from which bore hole CH-009 was drilled.

Details of Drilling at Yawi

A total of 2,505m has been drilled in 6 bore holes at Yawi.  Bore holes have been drilled on three targets as follows:
Qualified Person