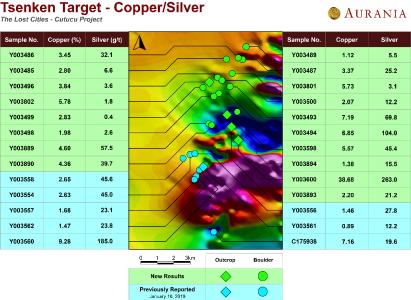 (PresseBox) ( Toronto, Ontario, 19-04-03 )
Aurania Resources Ltd. (TSXV: ARU) (OTCQB: AUIAF) (Frankfurt: 20Q) (“Aurania” or the “Company” - http://www.commodity-tv.net/c/search_adv/?v=298400) reports the Tsenken target in the Lost Cities – Cutucu Project (“Project”) in southeastern Ecuador has been enlarged by 6 kilometres (“km”); high-grade copper and silver has now been found over a 9km long trend.  Recent grab samples from boulders in streams contain up to 7% copper with 70 grams per tonne (“g/t”) silver.  Follow-up exploration of these streams has led to the discovery of copper and silver in outcrop.

Aurania’s President, Dr. Richard Spencer commented, “Results from recent sampling have tripled the size of the Tsenken target to an impressive length of 9km.  The copper-silver mineralization lies in sedimentary rocks above and to the side of a conspicuous geophysical feature that we believe is a buried porphyry cluster.  Our current exploration model is that copper and silver from the porphyry cluster spread into the enclosing, permeable sedimentary rocks where it was trapped, creating a more or less flat-lying layer of copper-silver – bearing rock.  This sheet-like target should be relatively simple to drill.  The potentially larger target presented by the covered porphyry would require much deeper drilling and would be investigated in a later phase of exploration.”

“In addition, scout drilling at Crunchy Hill is progressing well with four holes completed and the fifth is currently underway.  Samples from the first three holes have been dispatched to the laboratory.  Core recovery has been excellent.  No assays have been returned at this time.  We intend to release results once we have completed drilling a cluster of holes. This will enable us to understand the context of any mineralization.”

Copper and silver found in the area north of the magnetic feature at Tsenken (Figure 1) is contained in relatively flat-lying layers of sandstone and shale.  Mineralization is mainly concentrated in layers that contain carbon in fossilized plant fragments within the sedimentary rock.  The copper minerals observed include malachite, chrysocolla, tenorite, chalcocite, cuprite and minor bornite and chalcopyrite.

Grades from boulders in streams range from 0.8% copper with 1.3g/t silver to 9.3% copper with 185g/t silver (Figure 1).  The grade of outcrop samples ranges from 0.15% copper and 1.1g/t silver to 38.6% copper and 263g/t silver.  The latter sample with extreme grade probably represents an isolated pocket of mineralization akin to a gold nugget, that is atypical and should not be extrapolated – it is extremely unlikely that this extreme grade extends over any significant distance.  The magnetic feature evident at Tsenken in the data from the geophysical survey that the Company flew over the Project in late 2017, is about 5km long by 3km wide (Figure 1).  This is far larger than a typical porphyry.  One explanation for its size, raised in the Company’s January 10, 2019 press release, is that the Tsenken feature represents a cluster of porphyry bodies. Mineralization models will likely evolve with further exploration of the Project.

Some of the samples were prepared for analysis at ALS Global’s (“ALS”) lab in Quito, Ecuador and others at MS Analytical in Cuenca, Ecuador.  The rock samples were jaw-crushed to 10 mesh (crushed material passes through a mesh with apertures of 2 millimetres (“mm”)), from which a one-kilogram sub-sample was taken.  The sub-sample was crushed to a grain size of 0.075mm and a 200 gram (“g”) split was set aside for analysis.

Aurania personnel inserted a certified standard pulp sample, alternating with a field blank, at intervals of approximately 20 samples in all sample batches.

ALS’s preparation lab in Quito sent the prepared samples to its analytical facility in Lima, Peru for analysis.   Samples prepared by MS Analytical were sent to its assay facility in Vancouver for analysis. Approximately 0.25g of rock pulp underwent four-acid digestion and analysis for 48 elements by ICP-MS.  For the over-limit samples, those that had a grade of greater than 1% copper and 100g/t silver, 0.4 grams of pulp underwent digestion in four acids and the resulting liquid was diluted and analyzed by ICP-MS.

The ultra high-grade copper sample (sample Y003600) was re-assayed by MS Analytical, and the value reported in Figure 1 is the average of the two assays.  The re-assay values for copper were 38.68% in the original and 38.63% in the re-assay, and for silver, the values were 263g/t and 262g/t respectively.

ALS and MS Analytical reported that the analyses had passed their internal QAQC tests.  In addition, Aurania’s analysis of results from its QAQC samples showed the they passed its internal QAQC standards.

The technical information contained in this news release has been verified and approved by Jean-Paul Pallier, MSc.  Mr. Pallier is a designated EurGeol by the European Federation of Geologists and a Qualified Person as defined by National Instrument 43-101, Standards of Disclosure for Mineral Projects of the Canadian Securities Administrators.

Gold - a commodity or a currency