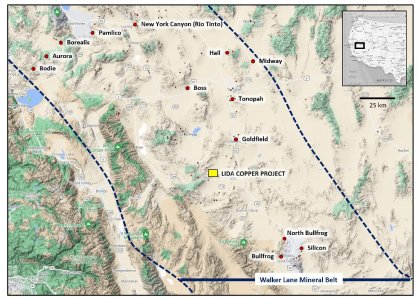 (PresseBox) ( Vancouver, British Columbia, 21-09-22 )
Aguila American Gold Limited (“Aguila” or the “Company”) (TSX-V: AGL - https://www.commodity-tv.com/ondemand/companies/profil/aguila-american-gold-ltd/) (OTCQB: AGLAF) (WKN:  A2DR6E) is pleased to announce it has secured through staking 100% ownership of the Lida copper project, located in Esmeralda County, Nevada. The project was identified during an extensive and ongoing generative program targeting copper deposits within the most mining supportive jurisdictions of North America.  Initial surface sampling and mapping has commenced to test this exciting new project.

Aguila is focused on copper and precious metal acquisition, exploration and development within the major mining belts of western North America.  The Company continues to target under-explored areas, including the recently acquired Lida and Cora projects where post-mineralization cover masks areas of high geological prospectivity in the vicinity of major mines.

The Walker Lane Mineral Belt is a broad northwest striking fault zone that trends for more than 500km through western Nevada and eastern California.  It is famous as a host to numerous large copper, gold and silver deposits and mines including Round Mountain, Comstock Lode, Northumberland, Goldfield, Tonopah, Pumpkin Hollow, New York Canyon and Silicon.  Almost all discoveries within the Walker Lane belt have been made in outcrop, providing an exceptional opportunity for new deposits to be discovered under shallow cover.

Key Points
“The newly staked Lida project represents another exciting step for Aguila into copper exploration in the Western US” said Mark Saxon, CEO of Aguila American Gold Limited. “Lida caught our eye immediately due to the abundance of surface copper oxide mineralization within a small area of outcrop surrounded by thin post-mineralization cover. The association with a magnetic high in the Walker Lane Mineral Belt is a consistent signature with major porphyry and epithermal systems.  Major mining companies exploring north and south highlights the pedigree of the terrane.

The timing could not be better, as secure global copper supplies are tightening and price is rising, coinciding with strong demand growth as a result of a global infrastructure, electrification and renewable energy boom. We look forward to applying modern exploration techniques to this under explored district.”

Aguila’s claims cover an area of low to moderate relief and sparse vegetation. The prospect is accessible by two-wheel drive vehicles and can be reached by US Highway 95. Up to several hundred prospecting pits, known locally as “dog holes” have been mapped over an area of 2km by 2km, with many exposing fracture-controlled copper within the quartzite and shales of the Campito Formation or located on gossans associated with intrusive breccia.

Small scale, historical mining activity was undertaken in the 18th and early 19th century focused on the No 1 shaft, which targeted structurally controlled primary copper mineralization comprising chalcopyrite, bornite and chalcocite. A structural zone adjacent to the No 1 shaft was reported to contain copper mineralization across a width of up to 30m.

Previous documented exploration was primarily conducted by Conoco during the 1970’s, which comprised of sampling, geophysics (induced polarisation) and shallow drilling. Conoco identified a large and strong IP anomaly, approximately 2km in length and 500m wide, which trends north-easterly across the prospect coincident with the widespread structurally controlled copper mineralization, small intrusions and widespread propylitic alteration. Drilling did not penetrate the quartzite.  Minor pyrite identified in drilling by Conoco within the quartzite is unlikely to account for the strong IP anomaly and may be associated with a pyrite rich “phyllic” porphyry shell.

Aguila believes the Campito Formation formed a relatively impermeable “cap” though which hydrothermal fluids only vented along structures to form the widespread fracture and vein-controlled mineralization found at surface.

The Lida project was staked to test beneath the widespread propylitic alteration and structurally controlled copper oxide mineralization with coincident IP anomaly for a preserved porphyry copper or copper skarn system. Porphyry copper systems in Nevada consistently exhibit a higher degree of preservation than in neighboring Arizona.

Initial exploration will consist of detailed mapping and sampling in addition to a high-resolution magnetic survey.  Results will be shared as they become available.

The Company has obtained and is continuing to review the historic exploration data. Although the historic exploration data was generated by reputable companies, Aguila cannot verify the data or determine the quality assurance and quality control measures applied in generating the data. Accordingly, the Company cautions that the exploration data reported in this news release may not be reliable. Readers are cautioned that a "qualified person" (as defined by National Instrument 43-101) has not yet completed sufficient work to be able to verify the historical information, and therefore the information should not be relied upon.

The Company has obtained historic exploration data for this press release from the Nevada Bureau of Mines and Geology and other public archives. Although historic exploration data was generated by reputable companies applying practice of the day, Aguila cannot verify the data or determine the quality assurance and quality control measures applied in generating the data. Furthermore, there is no guarantee that the exploration history is fully captured. Additional drilling may have been undertaken, however the Company has not been made aware of or obtained additional data. Accordingly, the Company cautions that the exploration data reported in this news release may not be reliable. Readers are cautioned that a "qualified person" as defined by National Instrument 43-101 has not completed sufficient work to be able to verify the historical information, and therefore the information should not be relied upon.

ON BEHALF OF THE BOARD,