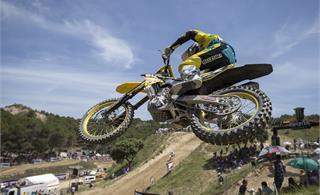 The Belgian rested his painful right thumb last week and missed the British Grand Prix as a result. After trying some light enduro-riding and climbing aboard his RM-Z450 today (Thursday) the 28 year old frustratingly had to admit defeat in his aim to tackle the French round in better shape.

"It is incredibly frustrating," he said. "After 10 minutes on the bike the thumb still gives me a lot of pain and I'm not sure what to do. I'm disappointed to miss another race but I need to rest this further and also talk with some more specialists to see what can be done to fix it for good. At least there is a free weekend after Villars sous Ecot so all I can do is look towards Maggiora. I want to say a massive thanks to the team for all their support through this."

Team-mate Clement Desalle came within a few points of victory at Matterley Basin and ensured his sixth podium finish of the season with second place overall. The Grand Prix of Spain earlier this month saw the only rostrum ceremony without '#25' uncorking champagne. Despite the excellent consistency that means the Belgian is just four points away from championship leader Max Nagl, Desalle is as eager as ever to clinch his first win this season and his first since the German round at Teutschenthal last summer.

"When you want the championship then you need some GP and moto wins, so I am looking for that and trying to improve all the time," he said. "I'm being consistent, which is good, but I'm looking for that win. I only have that mistake in Spain in the second moto where I did not see some bumps on the take-off."

Villars sous Ecot will be his latest target. The circuit, close to Switzerland, has undergone serious renovations to host its first Grand Prix this century and means that the French round moves away from traditional venues St Jean D'Angely and Ernee. Villars is notable for its staging of the 1988 Motocross of Nations and the annual competition will occur on French terrain again this year with Ernee building-up for the September fixture. The Villars course winds along a hillside setting with hard-pack soil.

Villars is a track at which both Rockstar Energy Suzuki Europe riders Glenn Coldenhoff and Jeremy Seewer have experience. As with every circuit this year Coldenhoff will be throwing around his RM-Z450 in anger for the first time and is now nearing full fitness again after the painful thumb problem he sustained in the Grand Prix of Spain three weeks ago. "I've been to Villars sous Ecot once, in EMX250," the Dutchman says. "It is a hillside track although I think there have been some big changes for the Grand Prix. There have been many off-cambers. I hope to do some practice in France this week and come out strong there. I didn't ride for one week but picked-it-up as we got nearer to the British GP and I think we will be back to normal for France.'

Team-mate, but on the RM-Z250 in the MX2 class, Jeremy Seewer will embrace the French Grand Prix almost like a 'home' event due to the track's proximity to the Swiss border. The factory rider is sure to count on some support from fans that will flock to the bank of the Villars setting. "It is the closest race to my place, just one hour and a half by car," the former EMX250 race winner said. "I was riding at Villars already on a 65. It has changed quite a bit but I'm sure it is going to be fun there. The ground is quite hard and stony. I think there will be plenty of Swiss fans and all my sponsors; the whole '# 91' team. It will be cool." Seewer is just five points away from the top-five of the MX2 World Championship standings and has already taken his maiden podium finish this season in Argentina.

The EMX250 European Championship is next in action in June where round five of nine will take place at Teutschenthal for the Grand Prix of Germany.

The weather forecast for the weekend predicts cloudy skies and temperatures around the 20-degree mark.