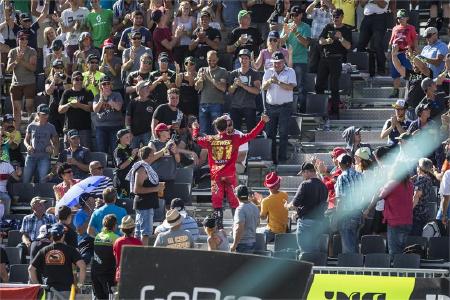 
At his home GP, Jeremy Seewer won the qualification race for the Suzuki World team in front of an ecstatic Swiss crowd. All the fans were on their feet as the #91 RM-Z250 rider made the pass for the lead, halfway through the race, holding onto the position for a comfortable victory and first gate pick for tomorrow’s races.

Behind him, Hunter Lawrence also got himself into the top 10 after a hard-fought race in the MX2 class while MXGP riders Kevin Strijbos and Arminas Jasikonis showed good speed as they went eighth and 13th respectively. In his first EMX250 race back after injury, Zach Pichon finished 15th but is hoping for more tomorrow as he gets back to race-pace.

The hero of the day though was Seewer and he had this to say about a perfect day where he was also fastest in both free practice and timed qualifying. “It was a really good race for me. Just the start wasn’t 100% but I managed to come through really quickly on board my RM-Z250. Julien Lieber rode really well and it took a few laps to get past him but overall it all went well and I enjoyed it all so much today. I really had such a good feeling, I feel home and let’s hope I can do the same tomorrow. Of course everyone wants to see me win, and the pressure is quite high for me to do so, but if I enjoy it and ride how I rode today, it shouldn’t be a problem.”

For Strijbos, this was probably the best he’s looked since returning from injury and unsurprisingly the Belgian was in high spirits after the performance: “The qualifying race went pretty well. I got a decent start but got pushed by a rider who fell in the first corner which caused me to lose some positions. My riding was good though, I found a good flow, it felt easy, I wasn’t pushing too hard or taking any risks. It was a good race, like old times almost. My speed was good and the changes we made after the warm-up to the RM-Z450WS worked really well for the race. I’m looking forward to tomorrow now.”

MXGP teammate Jasikonis was following Strijbos through the field in the first couple of laps but a mistake meant he had to start all over again. Unperturbed, the Lithuanian rider got to work and proved that it was possible to make passes on this Frauenfeld track. He had this to say about the race: “We’ve been finding better solutions on the RM-Z450WS for the start but unfortunately I made a little mistake which dropped me down a little. I made a few quick passes though and felt good. Then on the second lap I crashed in a turn and had to come from 26th place to 13th. I haven’t been riding midweek for a few weeks now because of my rib injury so it’s taking some time to find my rhythm but I think tomorrow will be a lot better.”

Unfortunately Lawrence was found it slightly more difficult to make the passes as the track was bit one-lined in the MX2 moto: “It was a frustrating qualification race getting stuck behind Michele Cervellin, especially when he was cross-jumping me which is really dangerous. The track is good though and I look forward to getting out there and getting a start and running up front. I always do better on race day which is when the points are at stake, so roll on tomorrow.”