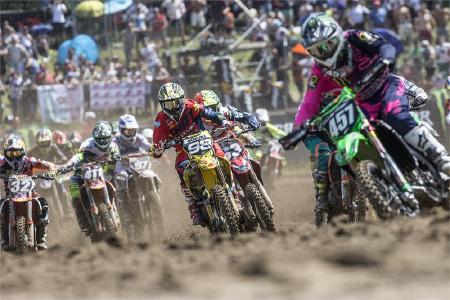 (PresseBox) ( Bensheim, 16-06-27 )
Jeremy Seewer just missed his eighth podium of the season in front of a 27,000 crowd wedged into the banks of the Nuvolari circuit in Mantova for the Fullback Grand Prix of Lombardia and a fixture that pulled the 2016 FIM Motocross World Championship up to round 12 of 18 today.

The Swiss pushed his RM-Z250 to sixth position and then seventh (for seventh overall) in two motos run in sunny and sweltering conditions and in somewhat controversial circumstances. The start gate malfunctioned in Saturday’s qualification heat and led to a restart. The same glitch seemed to occur at the beginning of the second moto and Seewer was one of a group of riders that was impeded but the sprint was not stopped. Team Suzuki World MX2 felt compelled to protest the action to the FIM.

Italy was again the destination for MXGP and for the second time in 2016 as the series moved south from the rainy climes of the UK and encountered an authentic summery climate in the Lombardia region north of Bologna and south of Verona. Seewer came to Mantova keen for more silverware and after having ridden well at Matterley Basin. The 21-year-old was quick through Saturday practice and miscued his start in the Qualification Heat (he rose to fourth for the same slot in the gate for the motos) but learned a valuable lesson for Sunday.

Seewer used the lively power of the RM-Z250 to a top-10 launch around the jump-laden and rough insubstantial sandy course in the first moto. Mantova was typically tight, compact and challenging with a lap-time that crested the two-minute mark. Seewer worked-up to the fringe of the top-five before another fall meant he had to rally again from 10th and was within four-tenths-of-a-second from seizing fifth place from Max Anstie at the finish. The second race began contentiously as the gate seemed to move but not drop. Seewer was one of several briefly trapped on the line and needing to again thread through the field. He rode well and was in a pack of four riders disputing the final podium step. He was close to passing Thomas Covington for fifth place but a small mistake dropped him to ninth with three laps to go. He recovered to sixth but was disappointed to miss the box by just one point.

Brian Hsu was competing at the track where he made his Grand Prix debut in 2015. The German was caught in a pile-up on the second corner and then spent the first moto pushing to 25th and missed-out on the points. In the second he again had to overtake his way up to 17th and was 23rd overall.

Mantova saw the EMX250 European Championship in action once more and with a gate full of Grand Prix aspirants tackling the eighth round of 10. Bas Vaessen produced a solid set of motos to forge a career landmark with his first win and third and first positions in the motos. The Dutchman was a clear third on Saturday and then on a rougher course on Sunday showed some more of his sand acumen to hound Darian Sanayei. The American had a technical problem and crashed and ‘#98’ was then free to motor to his first win in the category and his very first overall triumph. Vaessen is third in the championship standings.

The FIM Motocross World Championship now enters a summer break with the Grand Prix circus re-forming at the Loket circuit in the Czech Republic near the end of July.

“It was a great day for Bas and of course we are very happy that he could take his first win. We’re really disappointed that the second MX2 moto wasn’t stopped. It affected Jeremy and a number of other riders. There was a problem on Saturday and happened again today but the race was not stopped this time. We felt we had to log an appeal to the FIM and it was rejected.”

“That was one of the most disappointing races of the year. In terms of lap-times and rhythm I was one of the fastest guys behind Jeffrey. I didn't have the best start in the first race but then Bernardini closed the line and I almost went down. I had to come back to seventh and then crashed and finally made sixth. For the second I don't have much to say…it is just ridiculous that they didn't restart the race because everyone saw that the gate didn't drop. I did everything I could but made a mistake near the end and that’s how it is when you take a lot of risks to pass those riders; it wasn't easy on that track. I made the best of things today. I’m not happy and it is not fair for anyone. I have a few more points over Pauls but there are still a lot of races to go and it is not my goal just to race against him. I want to be upfront and doing my best.”

“I had such good starts! In the first moto I was almost third but it just slipped away; both times in fact. The heat was really sucking my potential today but the second race was pretty good as I came back from last to 17th. I rode well but I was just suffering and it was pretty tough…even if I learned a lot. I just need to get used to pushing the full 35 minutes; I missed a full winter, pre-season races and of course GP motos. I’m happy with how things are going and we are on the right way.”

“I’m really happy with my first overall win. I’ve been close a few times to a moto win and today I made it all happen. I moved up to third in the first moto but my start was better in the second and I was in second place quite quickly. We were going really fast and then Darian made a mistake and I had the lead. I had good lap-times and wasn’t too far away from the MX2 guys so I was really pleased with that. I enjoyed the last lap and had some fun on the jumps. It was a huge relief to get that moto win and the overall. We have been training a lot and working very hard and I was always ‘almost’ there but something would always happen. Anyway I worked hard with Stefan and Harry to minimise the mistakes and today I had two races without hardly any errors or issues and could take the win because of it.”