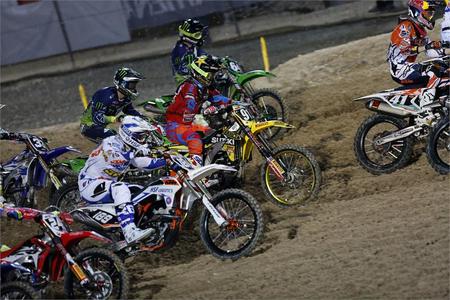 The young Swiss was seventh overall at Losail for the GP of Qatar - the third time the floodlight venue has hosted the MXGP season opener - but showed he is already operating on a higher level compared to his rookie year in 2014 by hitting the top-five at the first call.

Losail was softer and bumpier than usual and although the track and facility is one of the best maintained and prepped within the championship, the racing surface was still a tricky blend between being fast, rough and unpredictable. Grip-levels varied and the long leaps were sometimes tough 'asks' for the MX2 division and their 250cc four-stroke engines.

A positive start for Seewer on the RM-Z250 meant that he reached third position on the opening lap and from that moment was in the leading sect. He could not resist the speed of Dylan Ferrandis or Julien Lieber but showed his first full winter of training as a Pro had not been wasted. Aiming to capitalise on fifth place in the second moto Seewer was not as sharp out of the gate and even slipped off briefly in the first few laps. He nudged into the top-10 when Jordi Tixier crashed and then stayed ahead of the world champion to make sure of eighth position.

Glenn Coldenhoff is now steering an RM-Z450 in MXGP and made his debut in the class at Losail. The Dutchman flew to the first round with discomfort in his feet due to the two toes he broke in a training accident a fortnight beforehand. Slightly underprepared, Coldenhoff nevertheless tried to give his best account; unfortunately a great start in the first moto only yielded 18th by the flag. The second moto was more encouraging with his first top-10 finish in the category in 10th place to claim 13th overall.

Nakhonchaisri is the destination for round two of the MXGP series and the new circuit inside a road racing facility west of Bangkok should provide the same hot and humid conditions as the two previous incarnations of the Grand Prix.

"I was struggling all weekend long. I was riding way-too stiff with arm-pump and tired shoulders. I got a great start in the first moto and was fourth and started to drop back. I finally started to find my rhythm in the second moto; like I should be riding and passing a few guys. It was a good way to end the weekend."

"A pretty good start to the season. I'm happy and the first moto was very positive. The result was good and my riding was OK also. For a long time it was comfortable to do that pace. I made some mistakes in the second race but the track was tricky. We'll go again in Thailand."