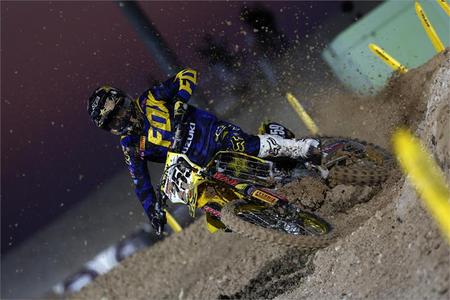 (PresseBox) ( Bensheim, 15-03-06 )
The RM-Z450 and RM-Z250 race engines barely had time to cool after last Saturday's Grand Prix of Qatar before the machinery was dismantled, checked and packed into freight for the second round of the 2015 FIM Motocross World Championship this weekend.

Little is known of the circuit for what will be only the third Thai MXGP; the two previous incarnations were held at the fast track of Si Racha, near the resort town of Pattaya. Nakhonchaisri is closer to Bangkok and located almost an hour west of the metropolis. The course will be set in the confines of a permanent road racing complex and a venue that hosts national Superbike contests.

Clement Desalle and Kevin Strijbos, plus Glenn Coldenhoff (riding for Rockstar Energy Suzuki Europe) will take their RM-Z450s into the unknown and will be wary of the fuel and heating problems that affected the performance of some of the motorcycles in the paddock last year at Si Racha. Desalle - who scored a decent second position at Losail, Qatar last weekend - also finished on the podium that day and clearly has no issues in running two 30-minute and two lap motos in heat that can easily top 35 degrees. The Belgian was also on the rostrum at Si Racha in 2013 and will therefore be aiming to continue his trophy run in the country as well as maintain his bright start to the 2015 campaign.

"I'm happy to be here. I feel relaxed, good with my body and also on the bike," Desalle said. "I prefer to be at home this week. I was able to follow a really good programme this winter and I will be going through my usual plan before we make the long flight. I always say that it's positive to find new places as part of the championship, so we will see this weekend."

Strijbos took a flight direct from Doha to Thailand. The 29 year old was seeking to rest his painful right wrist after a troublesome Grand Prix at Losail where he scored ninth position. The problem stems from a procedure to cure tendonitis and the Belgian could only compete in Qatar with the aid of some painkillers. "The weather forecast for Belgium was pretty bad with rain most days so I think it is better to be here and take some sun," he offered. "I think the conditions will help with the injury and we can acclimatise to the humidity."

Jeremy Seewer made a promising start to his second season as a factory Suzuki rider and with the RM-Z250 in the MX2 class. The Swiss equalled his best Grand Prix finish with fifth position in the first moto at Qatar. He will now steer an updated version of the machine that helped team-mate Glenn Coldenhoff to a memorable first MX2 podium in Suzuki colours at Si Racha last year. The Dutchman is not a fan of the heat but strangely has managed to post decent results in some of the hotter Grands Prix of recent years. Now Coldenhoff is on the RM-Z450 and will be remembering the consistent speed and form that brought him to a champagne celebration 12 months ago. Like brand-mate Strijbos, Coldenhoff also flew east after the chequered flag in Losail. "I think it will be tough; I always tend to struggle in the real heat but we will be there all week and will get some training done," he commented. "I took a podium in MX2 last year so a good result is possible. I will try the best I can."

Coldenhoff came through his MXGP class debut in Qatar and although he was not at full fitness (the 24 year old is still recovering from the toes he broke in a training accident) was able to get a gauge on the pace of his new competition. "When the feeling is alright I think I can go with those guys," he reflected. "OK, I have to be realistic I think the first six-eight are really strong. I think I can finish each moto in eighth place...but then I can also be 16th! I think that group is my place at the moment but we can build on that and go for those top-10 finishes."