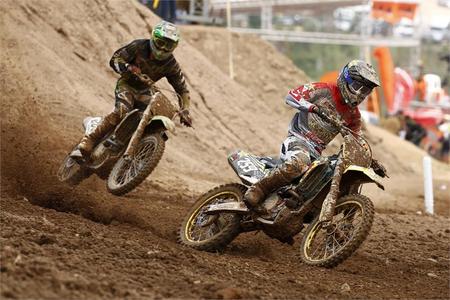 (PresseBox) ( Bensheim, 14-03-10 )
Glenn Coldenhoff continued his impressive start to life with the factory RM-Z250 by earning Rockstar Energy Suzuki Europe's first Grand Prix podium finish since 2010 under steamy Thai sunshine at Si Racha for the second round of 18 in the FIM Motocross World Championship.

The stars of the MX2 class had to deal with a fast - and later very bumpy and demanding - track for the two motos excitedly watched by 22,000 fans. It was in the heat and sunshine that the Dutchman excelled and forged some decent pace to collect second position overall.

The rolling Si Racha layout provided a technical test for the RM-Z250 race machinery with the high temperatures (+35), quick and long jumps and relentless speed. The ground itself was fine and rough in certain sections but hard-pack and slick in others. The inclined start straight meant a hefty uphill drag into the wide first turn and the setting overall made for a spectacular racing prospect.

Coldhenhoff signalled his intention from the beginning by capturing a decent third position in Saturday's Qualification Heat. He then used the power of his 250cc four-stroke motor to dive around the opening corners in the first of the 30 minutes and two-lap motos inside the leading group. Coldenhoff pressurised Dylan Ferrandis during the first phase of the race and became increasingly threatening, especially with a quick outside line up the steepest part of the course. Once he scooped the runner-up spot he had to fend off Arnaud Tonus in the last two laps but reached the finish line with second position. He backed that up with a solid third place in the second race. 'The Hoff' felt the sapping affects of the heat more strongly in the final minutes but a 22-20 scorecard put Suzuki and the RM-Z250 back on the rostrum.

Team-mates Julien Lieber and Jeremy Seewer both experienced some technical repercussions of the hot weather combined with the special race fuel permitted for the event that was believed to be behind some power problems. Seewer suffered in the first moto while Lieber struggled in the second. Seewer went 19-12 for 13th overall while Lieber took 14th and DNF-ed.

With the MX2 series just two rounds old, Coldenhoff holds third in the points standings. Rockstar Energy Suzuki Europe now have a brief hiatus of two weeks to head back, regroup and perform some more testing ahead of the Grand Prix of Brazil at Beto Carrero (north of Florianopolis) on March 30th.

"It was good for sure today. We were close in Qatar but I had some problems with my rear brake. I know I am strong and I am fit so I should be there every week. I am happy with the team and the bike and confident on it always. I made some training this week in Thailand and I thought I was ready for the heat but I still got hammered! I spent a lot of energy in the first moto and I couldn't give any more at the end of the second. Anyway the result is pretty good. I'm really looking forward to Brazil now."

"My speed wasn't too good on Saturday. I was too tight; like I was riding with a knife between my teeth! It was a bit similar in the first moto but I felt that it was starting to get better when I had some bike problems and it kept stopping. I finished in the points, so that was not so bad with the problems. My jump was good out of the gate in the second moto but I lost some positions on the start straight. I was 18th, I think, and finished 12th, which is the best result until now. I can do better but my speed and style was much more cool and easier. I am going to work on this and I hope for a few places further forward. Overall it was not such a bad weekend because I increased by speed and everything so it was good."

"In the first race I didn't get a good start and was 15th. I could not find the right lines or speed so I was really disappointed. My start was better in the second race and I was in 10th but the bike developed a small problem and I had to stop because it would have been too dangerous; overall not a great GP."