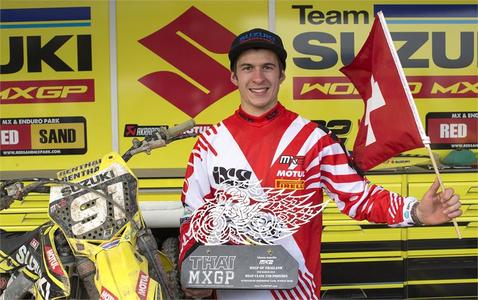 (PresseBox) ( Bensheim, 16-03-18 )
Team Suzuki World MX2 rider Jeremy Seewer, currently second in the 2016 World Championship aboard his RM-Z250, talks about his winter training schedule and the opening rounds of this season’s GP series.

It feels like it is only yesterday when last season ended; and now we have already had the first two races of 2016 under our belt.

I had a really good winter and we made some good progress with everything. The whole team has been working really hard on the bike since last October and we have improved a lot of things in the engine. I’m really happy with that and it seems like all the work from the team has paid off. There was also quite a big change over the winter with Stefan Everts coming in as a team boss: In the past I was living sometimes in Belgium and sometimes at home in Switzerland 50/ 50, but this year we decided that I should stay in Belgium most of the time to have the opportunity to be close to the team and especially practice together with my team-mates. I have to say I like it, I’m enjoying the whole moving here. Of course, sometimes I miss home and my family, but every now and then I go back.

After two positive pre-season races at Hawkstone Park and Valence, we headed to the opening GP of 2016 in Qatar on the Wednesday before the race. In the beginning of that week my body felt a bit weak so I stopped training and tried to recover and that helped. But on Thursday before the race it came back and I got a cold. It was pretty poorly on Saturday for the practice and time practice sessions. When riding, it was really painful to breathe because my whole throat was inflamed. We managed to get through it and I was surprised to finished fourth without feeling my best! I have to say a huge thanks to the whole team who made it possible. They all helped me in every way they could and together we made it happen. On Saturday I felt a lot better for the race, but I wasn’t 100%.

On Sunday after the race we did some sightseeing in Doha. The whole MX2 crew and I went to the Pearl. It was impressive to see what people are capable of. We enjoyed some lunch in a nice restaurant, watched some Qatari’s going up and down with their Ferraris and Lamborghinis before heading to Thailand early morning next day. We decided to stay in Bangkok all week and go out to the track only by Friday. Last year we went straight to a hotel close to the track, but there was nothing to do and it was a really boring week. I decided to rest until Wednesday to get back to 100% and get rid of the cold. There was a lot to do in Bangkok and we went to some huge shopping malls like I had never seen before.

There was a nice restaurant on the roof of our hotel were we enjoyed a nice dinner while having the view over the whole city of Bangkok. On the one hand, it was really nice to see that but I didn’t like to see all the smog over the city. It wasn’t nice to see the air so dirty and realising that we were in the middle of it. Overall we had some good fun that week. I started doing some training again on Wednesday, running and I felt really good with the heat.

The weekend went really well and I could celebrate a second place, which is my best result so far. Compared to last year, I could handle the heat a lot better and I was one of the fittest guys out there. After the race we had to hurry to catch our flight back to Belgium which was on Sunday night, but we made it!

Back at home, I tried to recover as quickly as possible from the really heavy race and I wanted to get rid of the jet lag as soon as possible. The first few nights were a bit difficult but I’m pretty good in finding my normal rhythm again. After a few days we went out to Lommel on Friday, the track was really wet and we all struggled in the beginning with those tough conditions. Now it’s time to put the head down and do some laps in the sand to get ready for the MXGP of Valkenswaard on March 28th. See you there!