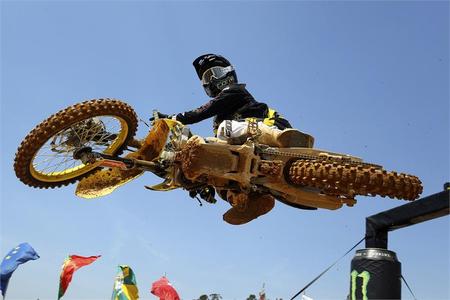 (PresseBox) ( Bensheim, 13-05-15 )
Rockstar Energy Suzuki Europe's Max Anstie has benefited from a week back on his family ranch in California in preparation for the Grand Prix of Brazil and the seventh stop of 17 in the FIM Motocross World Championship this weekend.

The young Briton will fly to the city of Florianopolis and then make the short trip north to Beto Carrero for the second year in succession after using the pause in the wake of the Portuguese round to train and practice near his base at Hemet in the United States.

The compact and jumpy track constructed on the outskirts of the theme park complex in the province of Santa Catarina will again entertain one of the busiest and most atmospheric events on the FIM calendar. The Grand Prix is again expected to be a sell-out with the circuit comprising relentless grandstand sections that create a real 'stadium' feel. Inside the red Beto Carrero dirt is mostly hard-pack although the GP paddock fraternity will be hoping that the same torrential rain that turned the race into an authentic 'mudder will not reappear on this occasion.

Anstie will face the fifth Brazilian Grand Prix this century knowing a sharp start on his factory-backed RM-Z250 and some fortune in the opening laps will mean contention for his maiden podium trophy since joining the team last October.

"We are really happy with the way we've been working on the bike with Max and reaching a point where we can begin to see our potential," commented Team Manager Thomas Ramsbacher. "We feel that all we are missing is some good luck in the opening lap or two to be in with a chance of the podium. It is very competitive for that second step but we have seen that Max has the speed and the ability to pass riders and get near the front. He just needs to put himself in frame from the beginning and not give himself so much work to do."

Brazil will be the last of the flyaway events in the 2013 campaign and will therefore be the final outing for the Superfinal that will mix the top 20 riders of MX1 and MX2 classes. The weather forecast predicts mild but changeable conditions for the weekend.