Starline on the marks: media fair IBC 2019 is coming 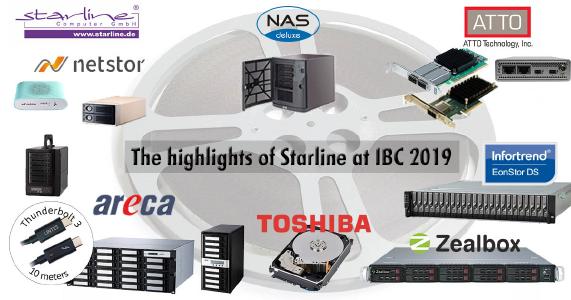 (PresseBox) ( Kirchheim/Teck, 19-08-22 )
The storage and server factory with a passion for sophisticated storage management will be represented once again with highly potent hardware and efficient software at the International Broadcasting Convention - booth 7.D51 - in Amsterdam this year. The value-added distributor has put together suitable storage highlights especially for media professionals from radio, film and YouTube.

Areca engineers have designed a new storage solution specifically for Thunderbolt 3 workgroups: The new central storage offers 24 drives, has five Thunderbolt 3 host ports (upgradable to 9 ports) and supports all RAID configurations. 4K videos can be safely stored on it and quickly accessed for editing.
Link

Open-E with Starline installation at the Toshiba booth 6.C23

New Areca release with the plus of flexibility

There is another astonishing model available through the German general importer Starline. The ARC-8050T3U-8 is not only capable of Thunderbolt 3 with 40 Gbps, but also works with computers via USB 3.1 Gen2. This means that the system also achieves a speed of up to 10 Gbps. So the interesting storage devices are well equipped for fast data backups on different systems. After all, the smart RAID systems from the ARC-8050 series already have Antarctic experience - thanks to the natural scientists Laurent Ballesta and Vincent Munier.
Link

The mobile model from Areca's 8050 series not only features a practical carrying handle, it can also be powered by 230 volts and 12 volts. This is made possible by a built-in XLR connection, which can even be operated in the jungle via a rechargeable battery pack. Six SFF drives (HDDs or SSDs) can be used for the data to be stored. Like its more stationary tower counterparts of the same series, the ARC-8050-6M also instantly stores huge amounts of data via Thunderbolt 3.
Link

The Areca engineers have built a 512 drive managing SAS controller that feels at home on many platforms thanks to its excellent driver support. System integrators will appreciate the low height of the ARC-1884ixl series RAID controllers. This means the storage controller can even be built into 2U rackmount chassis without using a riser card.
Link

Areca's ARC-1330-8x host bus adapter offers the fastest connection available when it comes to connecting SAS components: The HBA can handle 12, 6 and 3 Gbit/s as well as SATA data rates of 6 and 3 Gbit/s (per lane). It works with its PCI-Express interface in every computer, workstation and server with Red Hat, Centos, SUSE, Ubuntu Linux variants as well as on a Windows and Macintosh platform. Drivers for FreeBSD and Citrix XenServer will also be available soon.
Link

The Swiss pocket knife among the RAID controllers

Areca's ARC-9200 RAID head flexibly addresses up to 512 drives, offers a simple RAID set configuration, and has a modular design. The versatile stand-alone data manager only needs one unit in the rack, offers new ROC (RAID on a Chip) 12 Gbit/s SAS features and supports both SATA and SAS drives or SSDs. At the fair we will show you the 4x 16 Gibt/s Fibre Channel model. The product managers have combined it with a 16-Bay-JBOD RDL-JS16S12-R3 from RAIDdeluxe - an extremely robust and inexpensive pairing.
Link

ATTO offers the right translator for almost every interface type to bring devices with limited connectivity to the network. As an example of the symbiosis between Thunderbolt 3 (2x 40 Gbit/s) and Fibre Channel (2x 32 Gbit/s), Starline will show the ThunderLink FC 3322 (SFP+) at the IBC. Furthermore, you can see the counterpart of Thunderbolt 3 (2x 40 Gbit/s) on Ethernet (2x 25 GbE) with the ThunderLink NS 3252 (SFP28).
Link

For the fast uplink to the TV station: ATTO FastFrame N312 QSFP28

ATTO's dual-port network cards are exactly the right choice if you need things to go really fast. The PCIe 3.0 cards for 25, 40, 50 or 100 GbE networks operate with an exceptionally low latency of one microsecond. The good driver supply of ATTO, which contains all important Windows versions and FreeBSD as well as the latest kernels of Red Hat and SUSE, ensures a broad application base.
Link

With the EonStor DS 4000 Gen2 from Infortrend, every shot on the goal is a hit, because thanks to its redundant power supplies and fan modules - as well as a SuperCapacitor for the cache content - it is perfectly protected. In addition, the 2HE/24 Bay RAID system shines as an upgradeable single system with two 12 Gbps SAS expansion ports, two 1GbE iSCSI ports and two free hostboard slots.
Link

Starline developers have created a low-cost product-line based on the FreeNAS open source ZFS storage software. The result is an inexpensive and space-saving system that helps small teams focus on their project by taking care of their data safety. The solid hardware basis of Supermicro and ASUS guarantees high reliability and very good performance. The solution is fully upgradable and customisable according to customers’ requirements.
Link

With its "external NVMe speed for retrofitting", Netstor's slim Thunderbolt 3 flash memory astonishes even the most diehard journalists. The rapid storage expansion is considerably faster than any USB hard drive, yet just as easy to use. So if you need this portable additional storage for your Thunderbolt-3-compatible computer, please contact Starline at the exhibition booth.
Link

Netstor's external RAID system offers mobile data security at an entry-level price. It can be equipped with two low-cost SATA HDDs/SSDs, can handle the necessary RAID levels and does not take up much space. The NA460C is connected to the host via USB 3.1 (Gen2, Type-C), which makes almost 800 megabytes per second possible for reading and writing. Thunderbolt 3 connections are also an option.
Link

Cards from QLogic for every network

No matter which network topology you use: Starline has the right interface card for you. The QLE2742 (Dual), for example, offers 32 Gbit/s Fibre Channel technology in the sixth generation. From the 2700 series, the single or even quad-port variants are of course also available. For Ethernet adapters, Starline’s recommendation is the 41000 series, which is available in many different speed classes: 10 GbE (QL41134) or 10 and 25 GbE (QL41212).
Link

Toshiba's latest generation MG08 offers up to 16TB of formatted capacity and SATA and SAS interface options. The devices are designed for continuous operation at a workload of 550 TB per year. This makes the MG Series suitable for enterprise-class storage arrays as well as industrial server and storage systems. With its capacity and state-of-the-art technology, it addresses the unique needs of cloud computing centers and - infrastructures.
Link

These very compact yet extremely powerful servers with up to 56 CPU cores, 3 terabytes of RAM and separate boot drives are suitable for platforms such as VMware ESXi, Windows Server 2019 (Hyper-V) or Hyper-converged Virtual SAN from Datacore. Therefore, virtualization, databases, hosting as well as hyper-converged infrastructures are possible application field.
Link