EMIS improves cooperation between organizations for the management of emergency situations 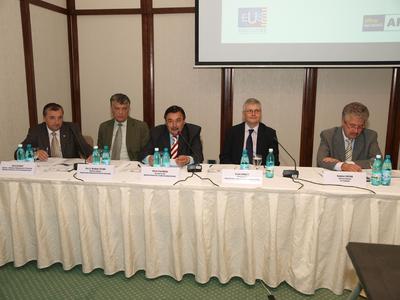 (PresseBox) ( Vienna/Bucharest, 08-08-06 )
S&T announces the official launch of EMIS project – Emergency Management Information System – in Romania. Financed by the World Bank the project has a value of approximately 7,5 milion € and will be implemented in twelve months time by a consortium led by S&T România and APD Communications Ltd. (UK) with support from expert UK partners, EUS Associates Ltd and Ultra Electronics APL. The Project Management Unit of MIRA (Ministry of Interior and Administration Reform) will have the responsibility of co-ordinating activity on behalf of all of the government stakeholders in the project.

EMIS represents a reference IT project for the public administration in Romania with immediate effects on the improvement of the response capacity of the emergency system at the regional and national level as well as on the increasing capacity of the Government to take the optimum decisions and to act in emergency situations.

The project has as a purpose to improve the exchange of information between the institutions involved in the management of emergency situations and to facilitate a fast adoption of the best decisions for the respective situations. The Emergency Management Information System – EMIS – is an integrated system meant to ensure the information support to the decision makers by collecting and distributing information about emergencies from and between those institutions involved in the management of these situations, evaluating the emergency situations and their effects, coordinating interventions, monitoring situations. EMIS also ensures the preparation, implementation, coordination of the plans and standard operational procedures dedicated to each particular situation.

EMIS implementation will respect the specific requirements of World Bank financed projects. The final operational acceptance is planned for the beginning of June 2009.

The project has several stages, one of them being the implementation of the system in pilot locations until the end of 2008, as follows: in two Operational Centers for Emergency Situations at the national level, situated in Bucharest and in Ciolpani and in a series of County Operational Centers for Emergency Situations among which Arad, Bihor, Botoºani, Prahova counties as well as in Bucharest.
As an important component, the design, implementation, training and support of the EMIS application will be jointly ensured by the software development division of S&T and the UK partners and is based on the latest software technologies. Robust interfaces developed with all relevant organizations will guarantee the necessary information in case of an emergency situation.

„EMIS project through both its complexity and national coverage involves the sustained effort of the S&T mature and experienced team. We are aware of our responsibility as a prime contractor in this project which is on the list of large projects our company has been involved in Romania. Undoubtedly EMIS represents an excercise to harmonize all the specific requirements of the organizations involved and its success is based on the commitment of the joint implementation teams,” stated Christian Rosner, CEO of S&T.

„The UK partners in this project (APD Communications Ltd, EUS Associates Ltd, and Ultra Electronics APL) are extremely proud to have been selected to support this landmark Romanian project. We have complete confidence in our technology, which forms the major part UK systems for emergency management, and are very pleased to share this expertise and experience, as a substantial part of the EMIS solution, with our partners and customer in Romania. This project provides further evidence of the strength of bilateral relations between the UK and Romania in this critical area,” stated Philip Shaw, Director of EUS Associates Limited, on behalf of the UK partners.