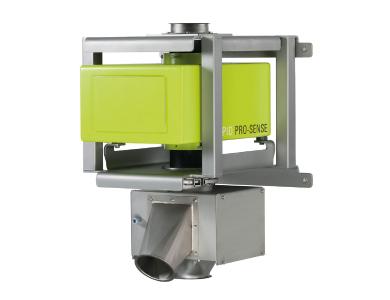 “Industrie 4.0” a major topic in the plastics industry
The German VDMA association of the plastics and rubber machinery industry and its member companies, which also include Sesotec GmbH from Schönberg, at the K 2016 trade fair want to demonstrate “Industrie 4.0” by way of concrete practical examples. They want to show to the trade which “Industrie 4.0” technologies are already successfully used to improve production efficiency in plastics and rubber machinery production, and what their advantages are for users.

Contaminant detectors networked in production facilities
Sesotec GmbH at the K trade fair presents the fit for “Industrie 4.0” RAPID PRO-SENSE high-performance metal separator. RAPID PRO-SENSE reliably detects and separates magnetic and non-magnetic metal particles even if they are enclosed in granulate and thus ensures the quality of plastic granulate and protects plastics-processing machines against damage and clogging. In terms of a "Smart Factory" the system can be integrated in networked production facilities.

New generation of multi-sensor sorting system
At Sesotec's trade fair stand the new FLAKE PURIFIER+ sorting system is presented for the first time. Based on a modular concept this system allows the combination of all available sensors for contaminant detection: Sensors for metal separation, sensors for colour separation / sorting, and sensors for the separation and sorting by plastic types.

The "+" in the FLAKE PURIFIER+ system stands for optimised material infeeding for a more evenly distributed material flow and increased material throughput. The system also allows easier maintenance and integration. The "+" furthermore stands for the dust-proof system design and for the integrated connections for dust and label extraction which all provide increased efficiency in the recycling process.

Comprehensive information about Sesotec at the K 2016 trade fair can be found at http://www.sesotec.com/... .

With a turnover of more than EUR 60 million the Sesotec group is one of the leading manufacturers of machines and systems for product inspection and for the sorting of material flows. Product sales primarily focus on the food, plastics, chemical, pharmaceutical, and recycling industries. Sesotec's global presence includes subsidiaries in Great Britain, France, Italy, China, Singapore, India, Canada, and in the USA, a representative office in Turkey, and more than 40 agencies all over the world. The Sesotec group presently has 500 employees, about 400 are working at the main factory in Schönberg.