At the ISE 2017 in Amsterdam, spo-comm has already presented its new high-end mini-PC spo-book KUMO IV and demonstrated its VR capability live 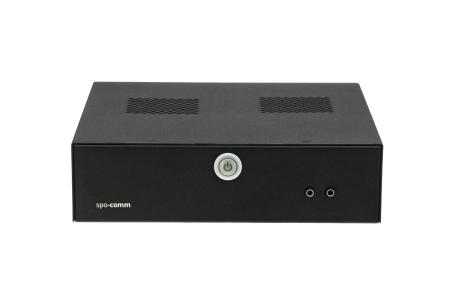 (PresseBox) ( Nürnberg, 17-03-01 )
The dedicated NVIDIA graphics card, the compact enclosure and the barely audible fans were immediately of interest and showed that the market is ripe for an industrial PC of the extra class.

Unique novelty
Like its predecessors, the spo-book KUMO IV is attractive due to its innovative and unique combination of a robust, compact metal housing and an extremely powerful, high-end graphics card. The latter is from NVIDIA's current Pascal generation, goes by the name GTX 1060 and is equipped with 6 GB DDR5 video RAM. An Intel Core i5-6400T Desktop CPU (Skylake) with four cores and a frequency of 2.2 (max. 2.8) gigahertz also delivers impressive performance. Whether it is high-resolution digital signage applications or sophisticated virtual reality solutions – the spo-book KUMO IV is capable of (almost) everything.

Four-fold 4K@60Hz
In addition to its outstanding performance, the spo-book KUMO IV also offers the latest connections. Thanks to 2-fold DisplayPort 1.3 and 2-fold HDMI 2.0b, the Mini-PC is able to simultaneously display 4K content with a picture frequency of 60 hertz on four screens simultaneously. And if 4K is not enough, the spo-book KUMO IV even displays 8K@60Hz, a resolution of a fabulous 7680 x 4320 pixels. It is supported by up to 32 GB DDR 4 RAM. Mass storage is served by an HDD or SSD with up to 960 GB.

Compact and quiet as a whisper
As you know from spo-comm mini PCs, the spo-book KUMO IV is also housed in a robust metal case. In addition, the industrial PC with the compact dimensions of 200 x 205 x 80 mm is delivered with a wall bracket according to VESA standard. Thanks to its Dual Smart Fan, the active fans can hardly be heard even at a high load. This allows the Mini-PC to be used without any problem even in noise-sensitive environments.

Simple design
With the new model, the design of the KUMO series has also been revised. The case is now in an elegant black and only has the power button and two audio connectors on the simple front panel. Everything else is located on the back panel. In addition to the four display ports, there are four USB interfaces (two of which are pursuant to the current 3.0 standard), two Gigabit LANs as well as an antenna connection for optional W-LAN and Bluetooth.

Customisable
The housing and software of the spo-book KUMO IV can be individually tailored to customer requirements. Even with small numbers of units, it is possible to paint the housing in the desired colour and to provide it with one's own logo. In addition to neutral packaging and a separate BIOS logo, the software can also be tailored to specific needs. In addition to the usual Windows 10 Professional, Windows 10 IoT is also available, with a few useful customising and security features. Linux will also be available soon.
If you are looking for a high-performance mini-PC for digital signage, virtual reality or multiview, the spo-book KUMO IV is a unique system that satisfies the highest performance requirements and can be used for exceptional graphics applications. The mini PC is available as of March and can be ordered in the desired configuration at www.spo-comm.de.

Highlights and technical data at a glance:
Connectors:
Front
Back

spo-comm offers mini pc solutions for industry and trade in Germany and Europe with a special expertise for digital signage. The specialist's portfolio ranges from hardware, software, and services up to complete supply chain management - always with a perfect fit and based on an expertise that exactly meets the customer's requirements thanks to modularly combined service components. spo-comm has a dense network with global presence of hardware partners, is amongst others most important partner of MSI IPC in Europe, and was founded in 2002. CEO is Michael Sporrer.