NTB Leads the Charge for Newsroom Innovation with Superdesk 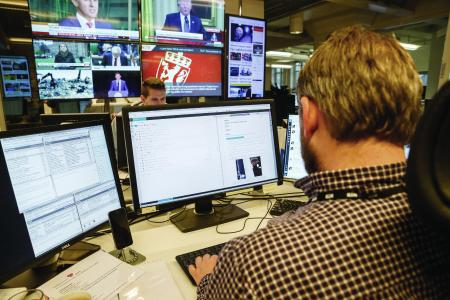 With a staff of 80 journalists, NTB produces 200-300 stories per day while continuously adding to an image database of 80 million-plus photos and videos via its NTB scanpix division.

“With Superdesk we can streamline our workflows,” said NTB Managing Editor Ole Kristian Bjellaanes. Smooth cooperation across different departments and desks, and easy access for reporters on the go are among the immediate benefits he sees in the new system.

NTB's ambition is to be in a position to constantly adapt to changing demands by customers, and to develop and target new products to specific customers’ needs. A flexible editorial production system is a fundamental component in this strategy.

When evaluating replacements for its legacy editorial system, NTB did not want another “black box” in the newsroom. Nor did they want to develop everything from scratch.

“In many traditional editorial publishing systems, you have all the features set out up front. If it turns out you need to change something – and you will! – the risk you take is that the provider will say ‘sorry’ – you are too small, we are not willing to change or adapt to your updated needs,” said Helen Vogt, head of innovations at NTB. “On the other hand: A tailor made solution, developed in-house, would not be able to keep up with and benefit from the constant technological developments that transform our business on a daily basis.”

Sourcefabric z.ú., Europe’s largest developer of open source tools for news media with a team of 40 developers, offered another model where features were developed in partnership with NTB to provide a modern web-based platform for end-to-end content creation, production, curation, distribution and publishing. Sourcefabric is a non-profit organisation, and since Superdesk code is open source, ownership remains with partners, like NTB.

“If journalists could code, this is what they would write,” said Sava Tatić, Sourcefabric’s managing director. “We know this because we work with them to develop Superdesk.”

"The NTB team had a clear idea about what their new editorial system should do since the very beginning. But instead of giving us a long list of detailed requirements, we agreed to work together in the agile way," added Karel Petrák, a news agency veteran and project manager at Sourcefabric. "We had several interesting and challenging discussions about user experience, editorial workflows, and even future products. As a result, there are a lot of new features and improvements that not only work for NTB but also benefit the rest of the Superdesk user community."

Working with Sourcefabric has been a great experience, according to Vogt, who is the project manager responsible for implementing Superdesk at NTB.

”It wasn’t just Superdesk's functionality that won us over, but also the benefits that come from being a part of a community of news agencies participating in an open source project. We can all share in ideas and new features that will help us become more competitive,” said Vogt. “We have seen this happening already in the course of developing and adapting the system to our needs, and we look forward to continuing this relationship of collaboration – with Sourcefabric and with the other newsrooms who are using Superdesk.”

In Sourcefabric’s view, this partnership model is a template for success in an industry beset with challenges.

“Together with partners like NTB, we believe Superdesk has the potential to shape the future of journalism,” said Tatić. “A modular, extensible approach to software tools is essential for businesses to survive as relentless industry upheavals continue, often spawned by the disruptive potential of emergent technologies.”

“We believe that as the industry continues to fragment, on both the consumer side and the providers themselves, the only viable way for news organisations is to adopt a collaborative, open-source model,” Tatić added. “This is the path Sourcefabric and its partners have chosen, and the resulting concentration of effort and minds has made Superdesk a digital newsroom system second to none.”

About Superdesk
Superdesk is a web-based content creation, production, distribution, publishing, curation and management platform. Superdesk is developed in partnership with media organisations worldwide, including such national news agency heavyweights as Australian Associated Press (AAP) and Norway's Norsk Telegrambyrå (NTB) where it is in live production. Superdesk is developed with commercial media partners and independent contributors as an open-source project.
www.superdesk.org

Sourcefabric is Europe’s largest open-source software house serving the news media industry. Headquartered in Prague, Czech Republic, Sourcefabric z.ú. brings together minds from all corners of the globe. All of our tools are open source and free to download: Superdesk, Live Blog, Airtime, and Booktype.
www.sourcefabric.org

Wenn nach dem Brand in einem Rechenzentrum oder wegen kritischer Schwachstellen in Exchange-Servern Kritik an der Cloud-Sicherheit zu hören ist, sollte man genauer hinschauen. Nach dem Shared-Responsibility-Modell ist nicht immer der Cloud-Provider verantwortlich. read more
The publisher indicated in each case is solely responsible for the press releases above, the event or job offer displayed, and the image and sound material used (see company info when clicking on image/message title or company info right column). As a rule, the publisher is also the author of the press releases and the attached image, sound and information material.
The use of information published here for personal information and editorial processing is generally free of charge. Please clarify any copyright issues with the stated publisher before further use. In the event of publication, please send a specimen copy to service@pressebox.de.