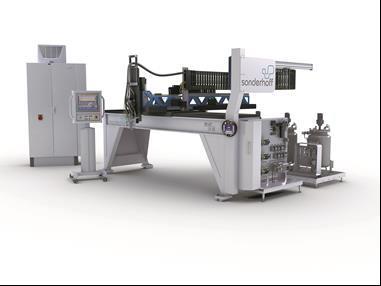 (PresseBox) ( Köln, 13-10-11 )
At the world's largest trade fair for plastics and rubber, from 16 to 23 October 2013 in Düsseldorf, Siemens together with Sonderhoff will present the fully automatic mixing and dosing system DM 403 from Sonderhoff Engineering equipped with the new Siemens motion control technology Simotion D 445 to the international plastics industry. On this machine it will be demonstrated live to trade visitors how the polyurethane-based 2-component foam sealing system Fermapor K31 from Sonderhoff Chemicals will be exactly dosed and applied accurately to the contour.

The Simotion D 445, which stands out for its clear visualization and uniform operation standard, is a scalable, modular and powerful motion control system that offers high flexibility for wherever precise motion control is required. The Simotion D445 synchronously coordinates the axis movements of the Sonderhoff LR-HD (High Dynamics) linear robot as well as all switching processes at the mixing head and all process-related machine components (servomotors, mixers, pumps) via Profinet at a control cycle of two milliseconds.

Synchronous coordination of the machine components ensures the axes movements maintain a repeat accuracy of ±0.1 mm even at feed rates of up to 30 m/min, which is crucial for precise and constant reproducibility of the seal application. High acceleration of up to 10 m/s² is especially important for parts with small radii. In such cases, the maximum feed rate must be kept strictly constant over the entire movement path. Both of these factors are decisive for evenly dimensioned application of the foam sealing, especially at its coupling points. Sliding speeds of up to nearly 60 m/min help minimize downtimes when changing between two or more processing positions.

The movements and speeds of the CNC axes on the linear robot of the DM 403 mixing and dosing system can be safely limited using the SLS (Safely Limited Speed) function. While teaching with the Simatic Mobile Panel, in particular, this is done right up close to the robot and the part to be sealed, to offer the operating personnel maximum safety. The decentralized F-CPU shuts down axes and machine components in a controlled fashion if a defined tolerance is improperly exceeded or upon other protection faults when in automatic mode.

The new performant G-Code Interpreter for the Siemens Simotion D445 interprets the contour programs of the mixing and dosing system for the processing in the motion controller. In collaboration with Siemens, Sonderhoff has developed for machine operators a man-machine interface with the G-Code Editor, which allows individual contour programs at the mixing and dosing machine to be taught, edited and managed. It takes only basic CNC knowledge to operate the system safely within the shortest time.

The Sonderhoff mixing and dosing system with Siemens motion control and user interface visualization is operated at the operating panel using a 19" touch screen monitor with a resolution of 1280 x 1024 pixels. The specific contour program can be set up machine-oriented with the help of a portable Simatic Mobile Panel featuring a 10" display at a resolution of 800 x 600 pixels.

Great flexibility and easy integration of the mixing and dosing system into existing production plants One compelling argument for the Simotion D445 is its modular design. Customized system variants with two to four material components can be realized. If required, servomotor modules can be added for two or more handling axes.

The increasing demand for uniform standards in control technology for production plants was another reason behind Sonderhoff's decision to provide its customers with another alternative to the existing controller by adding the Simotion D 445 to its mixing and dosing systems. The DM 40x series of Sonderhoff machines is therefore even easier to integrate into customers' production concepts with existing Siemens controllers. Another advantage for Sonderhoff customers: There is no need for additional training when commissioning the Sonderhoff mixing and dosing system, since the machine operator is already familiar with handling Siemens automation technology and already knows the operator guidance.

Sonderhoff Services GmbH (Cologne / Germany) and Sonderhoff Polymer-Services Austria GmbH (Dornbirn / Austria) have positioned themselves as toll manufacturers for foam gasket, gluing and potting applications with the highest precision. Their services comprehend individual sampling of prototypes as well as sealing, gluing and encapsulation of parts, from pilot application processes and small batches up to serial production for OEMs and industrial suppliers in Germany, Switzerland and Austria. Partner companies undertake the contract manufacturing of foam gasket, gluing and potting for the customers in Great Britain, Spain, Poland, India, Thailand, Japan, Korea and Brazil.

The affiliates of the Sonderhoff group of companies in Italy, the U.S.A and China offer the complete range of sales, technical and contract gasket application services to the OEMs in these countries as well as production and sales of chemicals for the sealing formulations and the distribution of dispensing machines from Sonderhoff.