Chinaplas 2014 was a success for Sonderhoff Suzhou 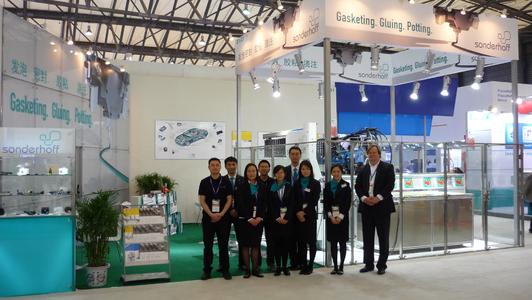 (PresseBox) ( Köln, 14-05-19 )
Like many other exhibitors, the Sonderhoff (Suzhou) Sealing Systems, based in Suzhou near Shanghai since 2009, evaluated the Chinaplas 2014 as a success. The trade fair came to an end on 26 April with a record number of 130,000 visitors and more than 3000 exhibitors from 39 countries. Once again it demonstrated its relevance in the plastics industry, for its suppliers such as Sonderhoff and the sales market in China. In addition the proportion of international visitors clearly increased compared to the previous year.

This was also evident at the Sonderhoff booth, since approximately 20% of the visitors came from outside of China. The demand for Sonderhoff products for gasket, bonding and potting application of industrial parts was very large. Countless contacts from such diverse industrial branches as electronics, switch board enclosures, lighting, automobile and domestic appliances were established.

At Chinaplas, Sonderhoff demonstrated the DM 403 mixing and dosing system for automated gasket applications on parts with a polyurethane foam sealant from the Fermapor® K31 product family. In the Sonderhoff product assortment, the customers have a wide choice of foam sealing products for use in a multitude of different applications. In regard to the foam sealings, the products Fermapor® K31 based on polyurethane or Fermasil® based on silicone provide optimal protection against humidity, dust, chemicals, oils, fats or other media and meet the industrial test standards (UL, NEMA, ATEX) as well as the IP protection types. These material systems are applied directly onto the part using a low pressure mixing and dosing system from the Sonderhoff Engineering DM 40x line, and subsequently harden on the part. Sonderhoff's Fast-Cure Foams are tack-free after a few minutes, allowing parts to be quickly processed without temporary storage.

Polyurethane potting for electronics and lighting

The polyurethane casting resins Fermadur® which harden at room temperature and are used for water-resistant potting of electronic components and LEDs were also of great interest for the visitors in Chinaplas. Shortly before application, both liquid material components of the Fermadur® polyurethane potting system are homogenously mixed in the mixing head of the dispensing machine and subsequently, free of bubbles, cast into the LED lighting strips. The potting compound hardens into a highly transparent sealing, in which the LEDs are completely embedded. The consistence of the potting material ranges from soft to very hard.

The spectrum of applications for the Fermadur® potting is wide. The highly transparent, UV-resistant Fermadur® clear potting systems used in casting LEDs offer an efficient and durable protection against adverse weather conditions such as moisture and dust when used outdoors. In this way, optically attractive lighting systems can be built with a broad freedom of design and can reach the sealing ingress protection class IP67. For example, Fermadur® can be utilized in the protective sealing of tunnel lighting and, at the same time, be adjusted to act as a flame retardant.

The automated implementation process for foam sealing, bonding and potting applications using a low pressure mixing and dosing system has been standard for decades in the automobile, electronic, filter, packaging, lighting and domestic appliance industries. In 2014 Chinaplas showed that the demand for automated system solutions for liquid sealing systems is also very high in China, not least because labour costs are also rising in China and large quantities in good quality can only be achieved reliably by using high-quality machines. Also Sonderhoff (Suzhou) Sealing Systems will further benefit from this.

The affiliates of the Sonderhoff group of companies in Italy, the U.S.A and China offer the complete range of sales, technical and contract gasket application services to the OEMs in these countries as well as production and sales of material systems and the distribution of dispensing machines from Sonderhoff.

Recommend Chinaplas 2014 was a success for Sonderhoff Suzhou press release