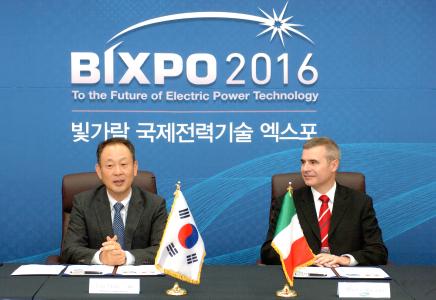 (PresseBox) ( Mezzolombardo (Italy) / Gwangju (South Korea), 16-12-21 )
At the beginning of November, the SOLIDpower Group - located in Italy, Germany and Switzerland - signed a MoU with the giant KEPCO Korea Electric Power Corporation for a greater share in the fuel cell technology as part of the energy revolution in South Korea. The corporation, more than half of which is owned by the Korean government, is responsible for up to 93 per cent of the country's own electricity supply. It sees its task mainly in extending the further use of localised fuel cell technology on the basis of proven SOFC systems, fundamentally through research and development. The country is already a worldwide leader in the use of fuel cell technology. With this collaboration both contracting parties will be working on the scaling up of system sizes and driving the commercialisation forward as fast as possible.

High-ranking representatives both from the government and from within the ranks of the country's industry and universities were present at the formal signing of the agreement by Dr Alberto Ravagni, CEO of the SOLIDpower Group and Dr Dongseob Kim, President of the KEPCO Research Institute. The agreement was signed during the BIXPO Energy Trade Fair in Gwangju - an important event for the Southeast Asian region. With a view to the future among other things, this agreement serves to secure the continued leading role of KEPCO in fuel-cellbased energy generation for South Korea and beyond, above all for micronetworks and smart grids.

"To tackle energy generation over the long term, you need to bring reliable yet highly efficient systems to the market through research and development. It's also important to remain competitive through attractive pricing," said Dr Dongseob Kim at the signing ceremony at the Kim Dae Jung Convention Center Dr Alberto Ravagni, CEO of the SOLIDpower group, emphasised that, "With the joint research and development and our know-how in the manufacturing of highly efficient SOFC systems we provide all the synergies needed for such large projects to flourish."

The project development for both contract partners, which will be located in the Bitgaram Energy Valley - a business park with more than 100 other companies and start-ups -will begin with a package of €1.8m. Here, in the south westernmost part of the country, all parties involved are in agreement on the objective: to drive forward the South Korean energy revolution with a combined effort.

SOLIDpower is a leading developer, manufacturer and distributor of products and technologies based on solid oxide fuel cells (SOFC). The SOLIDpower BlueGEN is a commercial SOFC micro power plant which can provide energy to commercial and residential buildings. The BlueGEN clearly demonstrates the highest electric efficiency and has already proven its reliability in hundreds of installations around the world. Additionally, the EnGen-2500 - the future design for optimising costs and introducing a uniform stack platform - has been tested in the field in the Europe-wide ene.field field test.

Related technical applications that use the SOLIDpower stack design as an electrolyser - that's to say, as a module for extracting hydrogen for refuelling units - demonstrate the range of SOLIDpower development. As its core business, however, the German SOLIDpower is focussing on the generation of combined heat and power for private and commercial customers using highly efficient SOFC products.

Investors such as the UK-based KEW Capital, and Leverage Green Energy from the USA, value the know-how of a company that has been developing consistently over many years. In the meantime, SOLIDpower does not just have considerable intellectual property at its disposal; when it took over the personnel from Ceramic Fuel Cells in the middle of 2015, it also secured the special worldwide knowledge and experience of high-grade accredited engineers. The further development of the modular SOLIDpower technology platform, however, forms the centre of all its activities and it is this which will enable all future specifications and forecast target costs to be met.

The development, testing and manufacturing of products takes place in different locations, with a clear division of areas of responsibility. Innovative systems are driven forward and put to the test at SOLIDpower's technology centre in Yverdon in Switzerland and by their development team in Australia. In this way, existing technology can be further improved. This is the foundation on which SOLIDpower has already developed and tested a 10 kW aggregate. The overall product development and production of the SOLIDpower stack takes place in Mezzolombardo in North Italy. For the series production of the BlueGEN, the company continues to focus on its current German production facility in Heinsberg, North Rhine-Westphalia. This is also where the production depth of the stack is further increased. The decision by the SOLIDpower Group to establish in Germany a manufacturing process which - prior to the acquisition of CFC by SOLIDpower - had been located in Australia, has played an important role here. In Heinsberg, this has led to the creation of more new jobs.

The "Home of BlueGEN" is the SOLIDpower Sales and Service Centre in Heinsberg, which has direct access to the BlueGEN stack and system plant. The company coordinates its commercial activities in the European market from here. This is also where the market partners of the company - from local fitters right through to leading energy suppliers and service providers - are trained in their tasks and prepared for working with the BlueGEN.

The market is changing and developing. Together with the market partners, new BlueGEN-based business models are being tested and implemented to meet requirements. These innovative business models created for the BlueGEN provide additional food for thought in Smart Grid technology and give us a glimpse of the power of the energy revolution.