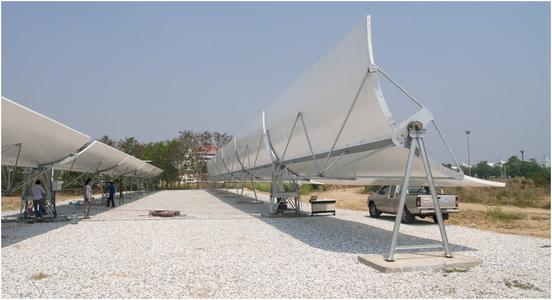 - DSG concept is environment friendly and it avoids usage of flammable & environmental hazard materials
- The DSG allows significant reductions of the total investment costs and levelized electricity cost.
- With DSG a higher operating temperature will be achievable.
- The DSG concepts has already acceptance at financial institutes, the first power plant was financed.

Solarlite has done the basic engineering of the whole power plant during which the basic process parameters and cycle calculations are finalised. Later on, the detailed engineering of the power block is hand-overed to the client Thai Solar Energy who is also the EPC for the power block. The solar field EPC including the solar field balance of plant, DSG process design and control and the master controller for the whole plant are being done by Solarlite.

- For the first time a parabolic trough commercial plant based on direct steam generation.
- In contrast to the parabolic trough collectors existing in the market, Solarlite has developed the SL 4600 collector, which is a light weight glass fiber composite material construction using only necessary minimal steel for torsional stiffness.
- Again in contrast to the commercial parabolic trough plant capacities (starting from 50 MWe), Solarlite has managed to construct a 5 MWe plant and proved that there is no limit for a minimum capacity for Utility scale CSP plants.

The basic element of the Solarlite 4600 collector is the Solarlite composite panel which has a dimension of 2.3 m width and 1 m length. These panels are combined together to form 1 segment with a dimension 4.6 m aperture width and 12 m length. It is possible to connect 10 of these segments to form one collector thus reaching up to 120 m. These collectors are combined together to form rows (collectors aligned in 1 axis in the North-South direction) and loops (collectors connected in series where the cold fluid enters in one end and the hot fluids leaves in the other end). The collector is moved from east to west to track the sun by means of a hydraulic drive system. The modular concept of Solarlite allows choosing the optimal length of the collector based on the specific locations' wind data. The combination of the light weight composite and slender steel structure allows having a reduced specific weight compared to the competitors.

The construction of the composite substrate allows the usage of thin film mirrors which reflects up to 95 % of the Direct Normal Insolation (DNI) onto the absorber pipe positioned at the focal point of the parabolic mirror. The conventionally used 4 mm thick glass mirrors are known to have a solar weighted specular reflectivity of 93% only. This difference alone can lead to an increase of up to 1.5% of peak optical efficiency.

Solarlite DSG concept is based on the combination between the recirculation and the injection cooling concepts for generating superheated steam. The advantage of combining these two concepts is the better controllability of the process parameters even during fluctuating DNI conditions. The recirculation mode enables that the receivers in the evaporator solar field are well cooled and the system pressure is maintained. The injection cooling concept enables better temperature control of the superheated steam delivered to the turbine. This combination results in a better controllability of the temperature and pressure of the superheated steam leaving the solar field to the turbine. The whole solarfield design has to be based on the requirements of the steam turbine. Solarlite has chosen the MAN MARC 2 turbine, which is the most efficient turbine currently available in the market for a power production based on Rankine cycle under 30 MWe capacity..

The solar field aperture area was calculated based on the MAN MARC 2 turbine's nominal and part load efficiencies and the hourly Meteosat prime DNI data. Based on the Solarlite 4600 collectors' dimension the total number of segments and number of rows were estimated. The number of collectors forming the evaporator and superheater loop and thus the choice of the loop lengths are based on the following criteria:

The site preparation, ground works and infrastructure for the power plant are completed. The solar field collector foundations are finalized in August 2010. By then also 30% of the evaporator solar field is completed. The turbine house and balance of plant buildings are under construction (status September 2010). The cold commissioning is expected to start during Feb 2011 and the hot commissioning to follow in the next month. The plant is planned to go into regular operation and feed electricity in to the grid during March/April 2011.

The investor, owner and the future operating entity is a Thailand based company named Thai Solar Energy. Thai Solar Energy's main objective is to construct a solar thermal power plant based on parabolic trough collector technology and feed the produced net electricity into the public grid. The basis for this project is the feed-in tariff law in Thailand introduced under the Very Small Power Producer (VSPP) regulations. The law has a limitation on the maximum capacity of 10 MW electrical and fixed the additional feed-in tariff of 8 baht/kWh for the next 10 years from the day the plant goes into operation. After this 10 years period, the electricity is to be sold for 3.6 or 2 baht/kWh. An extension of the 10 years period to 20 years is under discussion.

The complete power plant is planned to be constructed within a budget of approx 20 million €. This includes the solar field, turbine-generator, balance of plant, land, site preparation, infrastructure and project development costs. The solar field reaches a price of less than 300 € per m².

This innovative technology concept has impressed the jury of the German Innovation Award and Solarlite was honoured in the category "Startup" on the 30th of April, 2010 as "Finalist". A new phase in the development of solar technology has been reached with the Solarlite technology. The modular design based on combining a light composite construction and an efficient thin glass mirror is advantageous in various aspects, for example a decentralised production independent of the power plant sites as well as allowing different project sizes with no limitations. The direct evaporation of water instead of thermal oil and the option of cogeneration of thermal and electrical energy make the energy production nearly free of CO2 and more environmentally friendly. Solarlite technology is able to reduce total investment costs of a power plant project and guarantees attractive prices as well as a reliable source of energy.

The decentralized modular system of Solarlite is unique in the world and can be used in various applications such as power production for feed-in to the network or for stand-alone consumption of small and medium-sized industrial facilities. The construction method allows island solutions and smaller solar thermal parabolic trough plants starting from 500 kWe. Applications in combination with cogeneration can be used for the production of heat, absorption cooling or also for seawater desalination. Rural regions without any grid connection located in sunbelt areas can profit immensely from Solarlite technology.

TRESERT supplies electrical energy, heat and refrigeration to the SERT