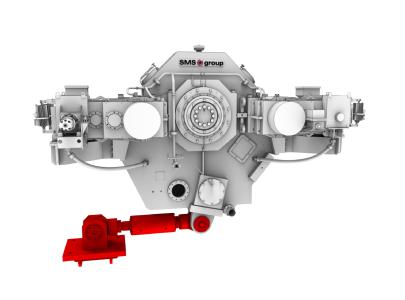 (PresseBox) ( Düsseldorf, 17-12-13 )
Acciaierie Valbruna S.p.A., Italy, has been supplied a torque support by SMS group (www.sms-group.com) for the 70-ton AOD converter at its steel plant in Vicenza. Acciaierie Valbruna has awarded SMS group the final acceptance certificate for the revamp two days ahead of schedule.

The aim of the revamp – which was to minimize the destructive forces acting on the gear unit, the bearings and foundation during AOD converter operation – was fully achieved in every respect. What’s more, installing the new electrohydraulic torque support has resulted in a substantial reduction in uncontrolled vibrations of the gear unit and the converter vessel.

Together with SMS INNSE S.p.A., a company of SMS group in Italy, SMS group supplied the torque support as a compact electrohy­draulic unit. The scope of supply also included the engineering and supervision of installation. Both cold and hot commissioning were performed in close cooperation with the customer.

Before the revamp, SMS group examined the condition using special sensors (accelerometers) which were connected to a measuring and data recording system. The measurements were performed in the presence of a specialist consultant from the University of Padua. The same measurements and recordings were repeated after the new torque support had been installed, and the collected data was compared with the previous measurements. It was certified that the contractually guaranteed values had been met. The consultant from the University of Padua made sure that the same method and the same components had been used for both measuring processes and subsequently confirmed the result. The target values under production conditions were achieved after a very short commissioning period.

Acciaierie Valbruna is fully satisfied with the results, especially in view of the increasing availability and higher production reliability of the AOD converter. In addition, the maintenance effort for the gear unit will be drastically reduced.

Even before awarding the FAC, Valbruna had given other steel mill operators the opportunity to take a look at the new torque support at the Vicenza plant.

Acciaierie Valbruna has three production locations - two in Italy, in Vicenza and Bolzano respectively, and one in Fort Wayne in the U.S.A. - as well as warehousing facilities at 40 sites around the globe. The company’s product range comprises around 700 different grades of special and stainless steel.

SMS group is a group of companies internationally active in plant construction and mechanical engineering for the steel and nonferrous metals industry. It has some 13,500 employees who generate worldwide sales of more than EUR 3 billion. The sole owner of the holding company SMS GmbH is the Familie Weiss Foundation.