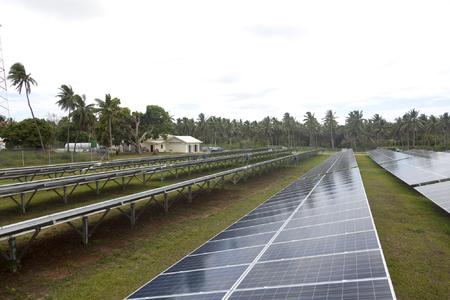 (PresseBox) ( Niestetal / Sydney / Tonga, 13-12-16 )
For the first time the SMA Fuel Save Solution, which combines diesel gensets and photovoltaics in a hybrid system, has been realised in the APAC region. The Tongan island of Vava'u now benefits from reduced energy costs, while minimising its dependence on fossil fuel. The system solution incorporates the SMA Fuel Save Controller, which enables the smart integration of photovoltaics while leaving the diesel gensets unaffected. An additional storage unit ensures that environmental challenges like cloud cover are not a problem. The PV diesel hybrid system will offset up to 70 percent of Vava'u's electricity demand during the day and approximately 13 percent of the annual demand of the Island.

The new solar farm includes ground-mounted photovoltaic panels and battery storage technology that is fully integrated with the island's diesel power station. The 500kW system has the capacity to produce 873MWh of energy per annum and is projected to offset an average of 225,000 litres of diesel each year. The system comprises 21 SMA Sunny Tripower 20000TL inverters, 15 SMA Sunny Backup 5000 inverters and the SMA Fuel Save Controller. "SMA is proud to be an integral part of the system at Vava'u, helping the Tongan government to reduce its fossil fuel dependency,"said Mark Twidell, Managing Director of SMA Australia. "This project benefits from the SMA Fuel Save Solution which stabilises the grid and prevents system failures."

Vava'u is the collective name for a chain of one large island and 40 smaller ones in Tonga, in the South Pacific Ocean. The main island of Vava'u covers an area of almost 90 square kilometres and is the second largest island in Tonga. Traditionally Vava'u relied on diesel generators for its electricity needs, but the development of a hybrid energy system was initialised in an effort to reduce fuel costs and CO2 emissions. The Tonga Energy Road Map (TERM) strives to meet the target to supply 50 percent of the Kingdom's power demand from renewable energy sources by the year 2020. The project was developed by Abu Dhabi based renewable energy company Masdar and is financed through a grant provided by the Abu Dhabi Fund for Development.