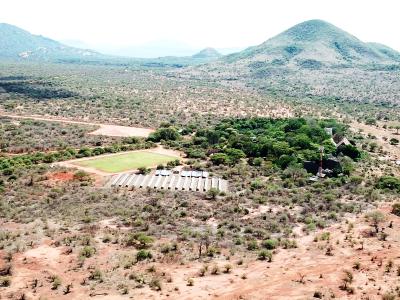 (PresseBox) ( Niestetal/Kenya, 18-12-10 )
In the Tsavo National Park in Kenya, guests at the Kilaguni Serena Safari Lodge can now listen to the sounds of nature undisturbed after sunset, too. Instead of loud diesel generators, a PV system combined with a battery storage system supplies energy for the tourist resort. The system is equipped with technical solutions from SMA Solar Technology AG (SMA) and was officially inaugurated in late November. The PV system at the Kilaguni Lodge is the largest PV system with tracker modules in Kenya.

The Kilaguni Serena Safari Lodge is the first lodge in Kenya to meet all of its energy requirements with self-generated solar power. For this purpose, Mettle Solar OFGEN and the engineering, procurement and construction (EPC) company Sustainable Power Solutions Kenya (SPS) installed a 310 KWp PV system and a battery storage system with capacity of approximately 670 KWh. In addition to 12 Sunny Tripower PV inverters for power generation, 24 Sunny Island battery inverters are used there. They enable the solar power produced to be temporarily stored in batteries.

“We are proud that SMA solutions are used in this project,” said Thorsten Ronge, Managing Director of SMA South Africa. “Just like SMA, this remarkable project is also committed to the secure, environmentally friendly and sustainable use of energy. I’m delighted that Mettle Solar OFGEN and SPS chose Sunny Island battery inverters. The SMA Battery inverters of this type have been installed in grid-connected and off-grid systems worldwide for over 20 years. This means that people in remote regions far from public utility infrastructure can also benefit from low-cost solar power.”

“We opted to use SMA inverters because each project is unique and we like to customize the solution to suit our clients needs and their environment”, said Axel Scholle, CEO and Founder of SPS. “SMA inverters were a great fit for the Kenyan projects. We trust their technologies; quality and robustness are key elements to consider when deploying projects in remote African regions.”

The PV solution for the Kilaguni Safari Lodge is not the only off-grid PV system that the Serena Hotels Group – a chain of luxury hotels and resorts primarily located in Africa and Asia –has in Kenya thus far to meet eco-travelers demands and respond to the needs of the environment. In addition to a 660 KWp project in the Amboseli National Park with a solution from SMA, two smaller Serena Hotels safari camps are also equipped with SMA inverters. Their PV diesel hybrid systems each supply around 80 kilowatts of power and help significantly reduce electricity costs for the lodges.

SMA has already supplied technology for several other projects in Kenya. In addition to smaller off-grid PV and hybrid systems, these also include larger systems such as a salt factory in the east of the country and a tea farm with around 1MW of power. By using self-generated solar power, battery storage systems and intelligent management of the system with the SMA Fuel Save Controller, companies can significantly reduce their energy costs for diesel fuel and sustainably contribute to protecting the environment.

Learn all about the SMA battery inverters on the SMA website.

The SMA Group with sales of around €900 million in 2017 is a global leader for solar inverters, a key component of all PV plants. SMA offers a wide range of products and solutions that allow for high energy yields for residential and commercial PV systems and large-scale PV power plants. To increase PV self-consumption efficiently, SMA system technology can easily be combined with different battery technologies. Intelligent energy management and digital energy solutions, comprehensive services and operational management of PV power plants round off SMA's range. The company is headquartered in Niestetal, near Kassel, Germany, is represented in 19 countries and has more than 3,000 employees worldwide, including 500 working in Development. SMA's multi-award-winning technology is protected by more than 1,200 patents and utility models. Since 2008, the Group's parent company, SMA Solar Technology AG, has been listed on the Prime Standard of the Frankfurt Stock Exchange (S92) and is listed in the SDAX index.