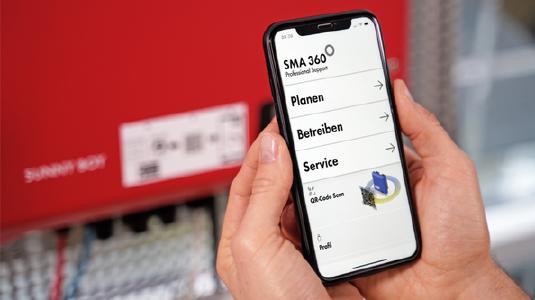 (PresseBox) ( Niestetal, 20-05-05 )
Whether you use them to analyze running routes and compare your sporting success with like-minded people, share photos with friends or take care of financial transactions conveniently on your cell phone – apps are highly practical and make our lives much easier. This is why SMA has developed the SMA 360 app for PV solar power professionals. It connect PV system simulation, planning, commissioning and monitoring as well as automatic notification in case of service. SMA 360 makes life easier for installers and offers all-round support for their business. The app is available immediately in the app stores and is available free of charge for the first year.

“Digitalization and connectivity increase business success in the solar industry. SMA 360 supports our customers in their everyday work and gives them that all-important edge over the competition,” said Nick Morbach, Executive Vice President of Home & Business Solutions at SMA. “The App enables solar power professionals to access all their data and documents on their cell phones. For this purpose, we have integrated online tools such as the popular Sunny Design und Sunny Portal in the app.”

With SMA 360 , solar professionals have all system data to hand at all times. All steps – from PV system simulation and commissioning through to the mobile monitoring of all systems in the portfolio and on-site customer service – can be performed directly on your cell phone or tablet. SMA 360 is regularly updated to incorporate new functions. In the future, these will include an automatic servicing notification.
What SMA 360 offers:

- On-site simulation, including an integrated energy calculator for optimum planning of new systems

Find out more about SMA 360 on the website. The app can be downloaded now from the iOS and Android app stores and is free for the first year.

For private PV system operators the SMA Energy app will be launched on the market in July. It enables digital management of all energy producers and consumers, including storage systems and electric vehicles, in your home and identifies energy saving potential.

As a leading global specialist in photovoltaic system technology, the SMA Group is setting the standards today for the decentralized and renewable energy supply of tomorrow. SMA's portfolio contains a wide range of efficient PV inverters, holistic system solutions for PV systems of all power classes, intelligent energy management systems and battery-storage solutions as well as complete solutions for PV diesel hybrid applications. Digital energy services as well as extensive services up to and including operation and maintenance services for PV power plants round off SMA's range. SMA inverters with a total output of 85 gigawatts have been installed in more than 190 countries worldwide. SMA's multi-award-winning technology is protected by approximately 1,500 patents and utility models. Since 2008, the Group's parent company, SMA Solar Technology AG, has been listed on the Prime Standard of the Frankfurt Stock Exchange (S92) and is listed in the SDAX index.