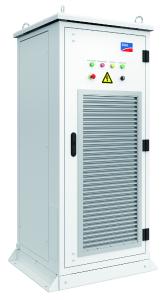 (PresseBox) ( Niestetal/Munich, 19-04-11 )
Generate solar power cost-effectively, store it and digitally control it: At Intersolar Europe 2019, SMA Solar Technology AG (SMA) will be unveiling the new SMA Energy System, a package featuring perfectly coordinated photovoltaic, storage and digital energy solutions capable of modular expansion for private, commercial and industrial applications. Another new feature is the 360-degree support for installers – from customer acquisition to service. In the area of PV power plants, the SMA DC coupling system for the DC-side integration of large storage systems has been nominated as a finalist for the prestigious ees AWARD.


“The digitalization and decentralization of the energy supply is rapidly gaining momentum, and the volume of electricity generated by photovoltaics as a proportion of the worldwide energy supply is growing,” said Dr. Jürgen Reinert, CEO of SMA. “This means that storage solutions in all segments are becoming increasingly important. The SMA Energy System, which we will be unveiling at Intersolar 2019, covers all steps involved in the integration of solar power in residential, commercial and industrial energy supply systems. In addition to intelligent PV and battery inverters for the production and storage of solar power, this also includes perfectly coordinated battery-storage systems and charging solutions for electric vehicles.”

Maximum installation simplicity: All SMA PV inverters with an output of between 1.5 kW and 10 kW use the same platform and feature an integrated web interface for commissioning via smartphone. In addition, state-of-the-art communication standards mean that intelligent energy management and SMA storage solutions can be added at any time. The modularly combinable SMA Energy System Home contains not only the Sunny Boy Storage battery inverter and the Sunny Home Manager 2.0 energy manager, but also intelligent PV inverters such as the new Sunny Tripower 8.0–10.0. Thanks to an innovative app, SMA offers installers 360-degree support – from customer acquisitions, system planning, installation and commissioning right through to service.

Charging electric vehicles with solar energy
At the SMA trade fair stand, e-mobility fans will have the chance to see how they can use the new SMA EV charger to easily charge their electric vehicle with self-generated, cost-effective solar power. Visitors will also have the opportunity to find out how the SMA Energy Meter powered by ennexOS and Audi's connect charging system for the Audi e-tron optimally integrate the charging process for the new Audi e-tron in the domestic energy management system.

The first SMA battery-storage system for companies
The SMA Energy System Business optimizes the energy supply and energy management in companies and commercial businesses. It can be shipped with all the hardware and software components that commercial businesses need for self-generating and storing solar power as well as for planning all the energy flows in the company transparently and cost-effectively. In addition to intelligent CORE1 PV inverters and the high-performance battery inverter Sunny Tripower Storage, it also includes the first SMA battery-storage system for commercial applications. The Energy System Business also contains comprehensive planning and monitoring tools and services as well as 10-year warranty coverage.

SMA solution for storage connection to PV power plants nominated for the EES AWARD
As the proportion of renewable energies in utility grids continues to increase worldwide, mass storage is becoming an increasingly important issue. SMA now also offers a solution for the direct storage of solar power in large solar power plants that saves costs for additional system technology. In addition, the lower conversion steps increase the efficiency of the stored energy. Thanks to its new DC coupling system, SMA is a finalist in the race for the prestigious EES AWARD. Visitors of the fair can also inform themselves about SMA Repowering. SMA thus offers individual modernization solutions worldwide to increase the availability of PV power plants.
You can find out all about the new SMA Energy System first-hand at Intersolar Europe 2019.
Visit us at booth 210 in hall B3.

As a leading global specialist in photovoltaic system technology, the SMA Group is setting the standards today for the decentralized and renewable energy supply of tomorrow. SMA's portfolio contains a wide range of efficient PV inverters, holistic system solutions for PV systems of all power classes, intelligent energy management systems and battery-storage solutions as well as complete solutions for PV diesel hybrid applications. Digital energy services as well as extensive services up to and including operation and maintenance services for PV power plants round off SMA's range. SMA inverters with a total output of around 75 gigawatts have been installed in more than 190 countries worldwide. SMA's multi-award-winning technology is protected by more than 1,200 patents and utility models. Since 2008, the Group's parent company, SMA Solar Technology AG, has been listed on the Prime Standard of the Frankfurt Stock Exchange (S92) and is listed in the SDAX index.