Spirit of Optimism at the Mobile World Congress

At the Mobile World Congress in Barcelona, it's all about fast networks, foldable phones and Europe's fear of the Chinese 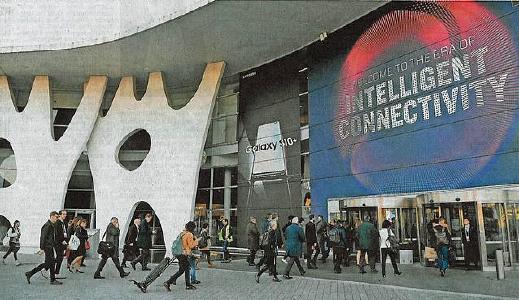 (PresseBox) ( Nürnberg, 19-06-19 )
Visitors flock to the Mobile World Congress (MWC) in Barcelona. At the industry summit it’s all about the new generation of 5G mobile communication, the end devices to go with it, and politics: Is it smart for Europe to exclude Huawei as a network supplier?

The computer exhibition Cebit, originally planned for June 2019 in Hanover, is dead; long live the Mobile World Congress (MWC) in Barcelona. Around 100,000 visitors are still expected by Thursday. Important topics are the next mobile data standard 5G and 5G-compatible smartphones, as well as the In-ternet of Things.

BARCELONA/NUREMBERG – SIGOS is at the Mobile World Congress every year and can there-fore make a comparison: "There is a more posi-tive vibe here than in the past few years," says Adil Kaya, head of the Nuremberg-based compa-ny specializing in test systems for mobile commu-nication. As always, he has flown to Catalonia with his team to attend the industry event. Here people talk more about new apps and less about the networks behind them. They think 5G is cer-tainly important, but it will be several years before the revolutionary technology can be used.

Kaya believes that Europe has not positioned itself well, beginning with the regulations leading up to the 5G license auctions in Germany in March and continuing with the warnings due to security concerns about the Chinese supplier Huawei. "The Europeans’ cautious tactics will not pay off. It will delay investments in new technolo-gies and solutions while Asian and US players rush ahead with their more agile approaches."

The end of all network bottlenecks?

First things first: Donald Trump was promptly the butt of a joke right at the beginning of MWC. "This year we will not talk about 6G," clarifies Rajeev Suri, head of the network supplier Nokia, at the world’s largest mobile communication conference in Barcelona. The US president had recently called for the implementation of 6G technology, which is not even in conceptual stages, in the US "as quickly as possible." However, what will be talked about this year at every stand and every event is 5G, 5G and more 5G. "

It’s a revolution – and it’s happening now," says analyst Mike Cansfield of the IT market research firm IDC. 5G promises a lot, including internet speeds that allow movies to be downloaded in high definition within seconds. Or reaction times so fast that industrial machines and even cars could be operated remotely. An end to capacity bottlenecks for network operators. Networking of all possible technologies independently of Wi-Fi connections. And finally a new era for app and service providers – because everyone is always connected to the cloud.

As world-changing as that sounds, it could be just as difficult to get 5G to customers, at least in the beginning stages. This is because the first 5G applications that they experience will look basical-ly just like the services of today’s LTE – video calling, for example. How do you market that? At first, not at all, says IDC analyst Cansfield. In four years, only four percent of users may be using 5G to go online – and 75 percent will remain in LTE networks. Users connect 5G with high ex-pectations: A survey carried out by the digital as-sociation Bitkom just before MWC showed that three out of four respondents expect 5G to pro-vide a better network without dead zones. Two out of three respondents expect higher speeds.

What will create problems for the provid-ers: Customers’ willingness to pay for the ex-pected improvements in performance is low. Therefore, the industry needs lighthouse apps and flagship devices to establish the attractive-ness of 5G. This year that includes smartphones that can be folded out into small tablets. One ar-gument is that large data contents such as mov-ies can also be accessible on the go, therefore there is a demand for larger screens. The manu-facturers at the forefront, Samsung and Huawei, are also hoping that network operators will subsi-dize their smartphones, which cost at least 2000€, because the operators hope for more business through streaming services, for exam-ple. This also means that, not only are the large manufacturers’ new phones foldable this season, they also come with 5G capabilities. "It was im-portant for us to be able to deliver a high-end smartphone with 5G. And when the network oper-ators are ready, they will also use it," said Sam-sung manager Mario Winter recently of the deci-sion to bring the new Galaxy 10S to Germany with a 5G version even though the frequencies must first be auctioned in the country. The Chi-nese challenger Xiaomi sets a low price level with a 5G smartphone for 599€.

How is it looking for the network opera-tors? Nokia, which left its golden age as the mar-ket leader in cell phone sales behind it long ago, see a great opportunity in 5G. Competitor Huawei, however, which is also counting on net-work expansion, is under pressure due to security concerns in the West. Among other concerns, the US warns of industrial espionage. In Barcelona, Huawei caused a sensation with its foldable smartphone Mate X. Area manager Richard Yu made a commitment to customers: "We will leave no backdoors open for any government," ensured the manager in Barcelona.

Head of Vodafone Nick Read warned in Barcelona that doing without Huawei’s network technology in mobile communications networks could delay the introduction of 5G in Europe by two years. The largest negative effect in this case would be the necessary wide-ranging exchange of infrastructure technology.

The head of the British mobile company also anticipates a supply problem for the industry if Huawei is excluded. Following a wave of con-solidation, there are now only three large network suppliers remaining. If we then only had access to two – Ericsson and Nokia – that would be bad for innovation.