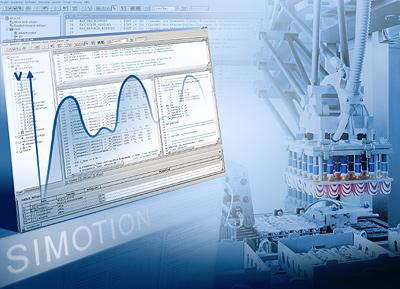 (PresseBox) ( Fürth, 07-08-07 )
At Fachpack 2007, Siemens Automation and Drives (A&D) will be presenting an interpolation method for handling processes which is integrated in the Simotion motion control system. To be introduced for the first time, the 'path interpolation' technology object substantially reduces the load on the system and, as a result, increase the performance of a machine. Only one controller is needed for all machine functions. The technology object can be used in conjunction with the 'Simotion Top Loading' software library. This represents a further improvement in respect of the engineering effort required.

Handling modules are being integrated in modern production and packaging machines more and more frequently. Previously, path movements necessary in the handling system were implemented by means of cams in the Motion Control system. This required a great deal of computation and led to restrictions on productivity, especially in the case of machines with a high degree of automation and short cycle times. With its new "path interpolation" technology object, Siemens A&D will be presenting a software solution which is integrated in Simotion. It renders cyclical calculation of cams superfluous and thus enhances the performance capability of machines.

On the system side, the "path interpolation" technology object supports linear, circular and polynomial interpolation on a main plane (2D) and in space (3D). The path movement is directly controlled and monitored by the Simotion controller. This considerably reduces the load on the system and enables cycle times of over 180 picks per minute in the case of Delta 2 and Delta 3 kinematics. Moreover, the most important standard kinematics of cartesian gantries can be implemented by means of Scara robots, roll pickers and robots with articulated arms. From the software point of view, path definition in the case of Simotion is therefore completely independent of the selection and parameterization of the kinematics. When a machine has to be retrofitted or modified, only the kinematics-related parameters have to be updated.

If such extreme cycle times are not needed, the CPU power thus released can be utilized for other functions. This can include the automation of several handling modules with one CPU. Due to the object-oriented approach, several instances of the "path interpolation" technology object can be used simultaneously and several handling devices can be controlled at the same time.

In conjunction with the "Simotion Top Loading" standard library, the integrated interpolation method considerably reduces the effort required for engineering and programming. The software library enables programming and configuration of top loading cells with different kinematics in combination with other software modules on one or more controllers. This means that synchronization with proprietary control architectures or incorporation in special programming languages for robot controllers can be dispensed with. All functions which have been programmed in accordance with IEC 61131 are supported. Real-time synchronization and comprehensive data management are possible without any limitations. With Simotion Top Loading and integrated interpolation, machine manufacturers and users have a software library which significantly simplifies engineering, programming and operator control, while enhancing machine performance at the same time.