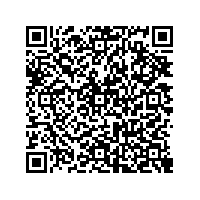 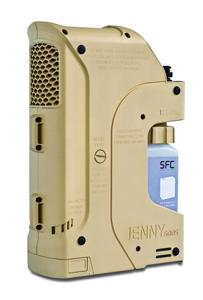 SFC Smart Fuel Cell, lead-ing supplier of fuel cell products for mobile and off-grid power applications, today announces the commercial launch of the JENNY portable fuel cell sys-tem for defense applications. The JENNY fuel cell was developed in the framework of JDA projects with international defense customers and has been in serial operation in the field by several NATO defense organizations since the beginning of last year.

SFC's JENNY portable fuel cell is a compact, autonomous, silent power supply worn on the body. It ensures that even in remote terrain far from the power grid or any other power source and even under rough environmental conditions soldiers will have a dependable electricity supply for their electrical devices -at any time, in any mission and in any weather.

The JENNY portable fuel cell is operated in combination with the SFC Power Manager, an intelligent power management device which assures that virtually any electronic device can be supplied with electricity by the fuel cell or other available power sources. The SFC Power Manager automatically adapts current and voltage to ensure that mission-critical systems will operate reliably and for much longer periods than batteries alone would allow.

SFC's JENNY fuel cells and the SFC Power Manager have met rigorous military requirements in extensive field tests and in actual field use. The small size of the fuel cell and the high energy density of the fuel methanol, along with the SFC Power Manager, reduce a soldier's weight load up to 80 percent compared to carrying conventional lithium-ion batteries. In operation the fuel cell produces close to zero emissions and is barely detectable due to its low surface temperature. It has been proven to operate reliably even in challenging environments such as extreme temperatures (-20 °C to +50 °C / -4 °F to 122 °F) and - without any performance loss - at altitudes exceeding 4,000 m. (13,000 ft) or fully submerged under water.

"We are proud that with the JENNY portable fuel cell we can offer soldiers a 100 percent reliable off-grid power source that will ensure that they do not run out of power during their mission ever again", said Dr. Peter Podesser, CEO of SFC Smart Fuel Cell. "With these properties and the weight saving benefits, the JENNY portable fuel cell makes an important contribution to the operability, efficiency and the protection of soldiers in the field."

SFC will demonstrate the JENNY portable fuel cell at SFC's Booth A03 in Hall 10 on Feb. 24, during IDEX at the Abu Dhabi National Exhibition Center, Feb. 22-26.