Part 2 | Prototyping does not equal prototype 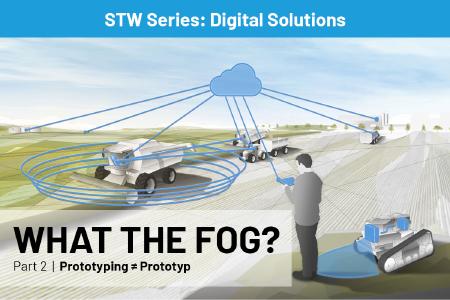 (PresseBox) ( Kaufbeuren, 20-06-03 )
The Coronavirus pandemic is forcing companies to go digital. Anyone who does not have a clue when digital gibberish such as for example "prototyping" are used, will in future be given regular, easy-to-understand explanations of digitalization terminology in our series "Digital Solutions".

With 35 years of experience in the digitalization, automation and electrification of mobile machines, we support our customers with customized workshops, the right concepts and suitable system architectures.

When implementing digital projects, many languages are spoken – and not just programming languages. At the beginning, the idea to be implemented is usually described from the user's point of view, in the best case with short and simple words, for example as a user story. However, it can actually be a disadvantage if the specifications for programming, system architecture or the design of a user interface are already too specific at this stage. Over the course of the project, such restrictions can become obstacles that later lead to great efforts during implementation, since especially in software development, supposedly small details can sometimes mean extremely large differences in implementation effort. The challenge here is to work out the use cases generically and at the same time to get to the point as precisely and straightforwardly as possible. Based on this, an expert can now create a so-called mock-up in order to demonstrate the design, the interaction with the user – the so-called User Experience (UX) – and to some extent already individual functions of the planned product. The range includes everything from simple drawings or pictures to interactive web pages created with specially available visualization programs. Clear communication with the stakeholders involved can thus be made considerably easier, or even possible at all. As such proposals are now already being prepared in the context of a possible implementation, attention can also be paid to the prerequisites for easy feasibility. Modularity and extendibility should also be considered here. Using a modular system such as MACHINES.cloud and TCG hardware and software, the first functioning demonstrators can be configured and tested in a very short time, without the need for extensive programming and the associated investments. Often the term "rapid prototyping", which originally comes from the field of model and prototype construction, is used in this context. As with the product development of material goods, a simplified test model, a so-called prototype, can then be generated which already represents a preliminary stage to series production in terms of the functional scope or design of the user interface. With regard to software, series production is equivalent to rolling out a release status (release of a software version) for a large group of users. In particular in the development of software, however, it has become apparent that requirements are not defined precisely enough in advance, cannot be communicated trivially, or sometimes even change during the development process. In order to minimize risks, especially in major projects with high development costs, it has therefore proved advantageous to generate usable functions as quickly as possible and to align them with the customer's requirements at short and regular intervals.
The so-called agile software development provides the appropriate methods and forms of organization for precisely this purpose. Since software is also subject to a product life cycle, the effort required for maintenance should not be underestimated, for example to generate and install bug fixes or security-relevant updates. All aspects of the described procedure ultimately serve to divide the path to the finished digital solution into small steps and thus maintain an overview. Think big - start smart.

As an internationally active company with Headquarter in Kaufbeuren, we stand for the digitalization, automation and electrification of mobile machines for 35 years. With generic or customer-specific products, systems and solutions developed and manufactured at our headquarters in Germany, we support our customers with innovative technology on their way to making their machines the best in the world.

Next generation of the Battery Management System mBMS