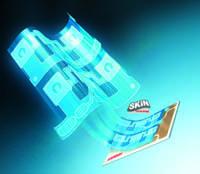 (PresseBox) ( Nuremberg, 11-05-27 )
Semikron has developed a revolutionary packaging technology for power semiconductors which does away with bond wires, solders and thermal paste. The new SKiN Technology is based on the use of a flexible foil and sintered connections rather than bond wires, solders and thermal paste. The current density is doubled to 3 A/cm2 compared with 1.5 A/ cm2 achievable with standard wire bond technology. The converter volume can therefore be reduced by 35%. This reliable and space-saving technology is the optimum solution for vehicle and wind power applications.

This results in a higher current carrying capacity and 10 times the load cycle capability - unthinkable with the restrictive wire bonding used in power electronics in the past. Wire bonding has been the main method of connecting the chip upper to a DBC substrate for the past 25 years. Wire bonding is not up to the higher current density that technical advances have brought about, meaning reliability is impaired. In the new packaging, a sintered foil now replaces the wire bonding on the chips, and the underside of the chip is sintered to the DBC. This results in optimum thermal and electrical chip connection, since sintered layers have a lower thermal resistance than solder equivalents. The sintered foil connects the chip across its entire surface, whereas bond wires connect the chips at the contact points only. Thanks to the high load cycle capability that this new packaging technology offers, higher operating temperatures are possible. Given the move towards new materials such as SiC and GaN, these elevated temperatures can then be fully exploited.

But it's not only the wire bonding that has been done away with in the new packaging solution. In fact, the new packaging is free of solder thermal paste. Instead, a sinter layer replaces the thermal paste layer and the soldered base plate. Thermal paste is responsible for around 30% of the total thermal resistance in a system. By replacing this, the thermal conductivity between chip and heat sink is improved, resulting in a 30% increase in usable electric current.

With SKiN Technology is it now possible that a 3 MW wind power converter can be fit into a single switch cabinet. Another example is a 90 kW converter for hybrid and electric vehicles where this converter can be 35% smaller than the smallest converter on the market today. For converters in vehicles and wind power units, liquid-cooled systems are used, and the compact and lightweight converters used offer our customers an important competitive edge.

Semikron is a one-stop provider of chips, discrete semiconductors, transistor, diode and thyristor power modules, power assemblies and systems for markets such as industrial drives, wind and solar, hybrid and electric vehicles, the rail industry and power supplies. Globally Semikron technology powers nearly every second windmill. According to a survey carried out by BTM Consult ApS, the total wind power capacity installed until 2009 was 122 Gigawatt. 57 Gigawatt comprises power semiconductors from Semikron.

The dedication to the hybrid and electric vehicle market is evident in the development and production of power semiconductors for this market but also the majority take-over of Compact Dynamics GmbH, a development specialist for innovative control systems, the joint venture with drivetek, a provider for application-specific control technology, and the take-over of VePOINT, developing and producing inverters, DC/DC converters and chargers.

Semikron is the market leader in the field of diode/thyristor semiconductor modules, enjoying a 30% share of the worldwide market. (Source: IMS Research "The global power semiconductor market 2010")