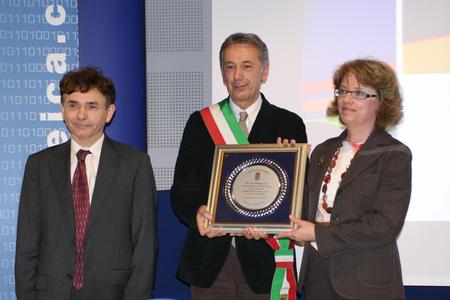 (PresseBox) ( Strambino, Italy, 12-02-22 )
Founded as a test house specialized in functional test programming, today Seica SpA is a leader in developing and manufacturing systems and applications for testing electronic boards and modules. The company has been on a strong growth path for several years, and to support this development, last week the directors signed the final contract sealing the acquisition of an industrial lot destined for the construction of another building to create the space for the expanding engineering and manufacturing activities.

Seica's DNA has always included strong international tendencies, both in terms of customers and partnerships, but at the same time it is also an important part of the local economy and, in recognition of Seica's significant role in its development, the local government recently awarded Barbara Duvall and Antonio Grassino with a plaque commemorating the 25 year anniversary of the company. The expansion of the industrial facilities in Strambino will further contribute to the development of the local economy, and will also allow Seica to better respond to the requirements of its increasingly global marketplace.

Seica's global presence is assured by an extensive sales network and, in addition to the main Headquarters in Italy, there are four subsidiaries: Seica France (Paris) and Seica Inc, (Salem NH and Dallas) opened in 2000, Seica Electronics (Suzhou) in China opened in 2004, and Seica Deutschland (Munich) opened in 2008.

Operating in a business is directly related to the electronics industry in general, Seica has been fully engaged and proactive in the noted rapid evolution of this sector in regard to technology, geography, product life cycles and manufacturing strategies, while remaining true to the founding principles of innovation, flexibility and cost effectiveness. This commitment is reflected in the leading-edge technology offered for all aspects of test, and in the attention given to providing products that help customers achieve their goals to increase the productivity of their investments.

Seica S.p.A, founded in 1986, is a global supplier of automatic test equipment and selective soldering systems, with an installed base of more than 1000 systems on four different continents. Seica offers completely automated, laser-based selective soldering solutions, as well as a complete line of test solutions, which include bed of nails and flying probe testers; these have the ability to perform manufacturing defect analysis, in-circuit tests, functional tests and optical tests of loaded boards, second and third level electronic modules and printed circuit boards. Seica S.p.A corporate headquarters is located in Italy, with offices in France, Germany, USA, and China, along with a worldwide distribution network.