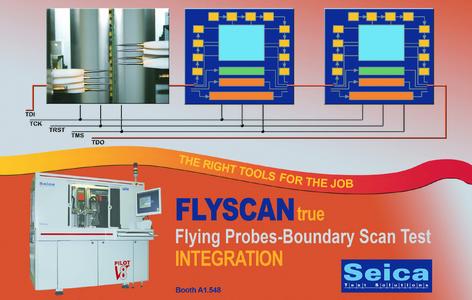 (PresseBox) ( Strambino, Italy, 09-10-27 )
Aiming to further enrich its range of solutions for the test and repair of electronic boards, Seica, in partnership with Temento Systems, has developed the FlyScan module as a new approach to the integration of the boundary scan technique and flying probe test systems. The true innovation of FlyScan, is today available on the complete line of Pilot/Aerial flying probe testers, it's full integration at the core system level, ensuring the following capabilities at a competitive price:

- Automatic generation of the test program in a single software environment(Seica VIVA)
- Automatic creation of the boundary scan program also for nets which are not of the JTAG type, using the "extended test" function and the flying probes to transform them into "JTAG testable" nets
- Automatic elimination of test redundancies
- Automatic fault diagnostics, with real-time generation of additional tests executed by the flying probes for the specific identification of the faulty component.
- A single test report in the VIVA environment
- Management of the faults detected by the boundary scan test in the Seica Repair Station environment

Even though its development and integration is the result of a significant investment in R&D, the basic idea of the FlyScan module is very simple: it exploits the specific benefits of flying probe and boundary scan testers, creating a single test program which utilizes the full capabilities of both, not as two entities working independently, but in a fully integrated system.

Compared to the classic approach where a board is subjected first to a standard flying probe test and then to a boundary scan test on a separate test station, the core interaction between the worlds of flying probe and boundary scan test enabled by the Seica FlyScan module provides a decidedly improved test result, easily measurable in terms of speed, throughput and fault coverage.

FlyScan is now available on all Seica's Pilot/Aerial flying probe systems, from the entry-level Aerial M2 right up to the top of the range Pilot V8.

Founded in 1986, Seica S.p.A. is a global supplier of automatic test equipment and selective soldering systems, with an installed base of more than 900 systems on four different continents. Seica offers a complete line of test solutions, including bed of nails and flying probe testers, able to perform MDA, in-circuit and full functional tests of assembled electronic boards and modules, and printed circuit boards, as well as laser-based selective soldering systems for electronic board manufacturing. Company headquarters are located in Strambino, Italy, with direct offices in France and USA, Germany and China, supported by a vast distribution network covering the rest of the world.

Seica's innovative solutions are being used across the globe to improve quality, increase productivity and save money in all areas of electronics manufacturing, including automotive, defense and consumer. Please see www.seica.com