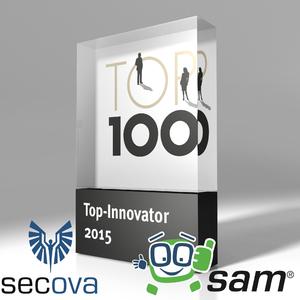 (PresseBox) ( Rheine, 15-07-02 )
Success through entrepreneurial vision: The secova GmbH & Co. KG was named one of the most innovative middle class companies in Germany on June 26th at the German SME summit in Essen. The "Top 100" mentor and science journalist, Ranga Yogeshwar, honored the company from Rheine with the "Top 100" seal that has been awarded to the most innovative companies for over 20 years. Earlier, secova had undergone a two-stage scientific analysis process. The company can now call itself a top innovator for a second time after 2012.

secova GmbH & Co. KG, which is now labelled "Top 100", scored high in the innovation competition particularly due to its innovation climate. In the software company that is based in North Rhine-Westphalia, the work environment is characterized by personal responsibility and employee freedom. The management is always keen to leave room for experimentation. In the company that was founded in 2008, making mistakes is expressly permitted. "If employees are rebuked, they refrain from taking responsibility when things go wrong. As a result, many potentials and opportunities in the company end up completely unused," explains Joerg Klaas, the Managing Director. "And we definitely do not want that, it would paralyze the entire process."

An average of 20 improvement suggestions are provided every year by each of the 40 employees. In turn, this enables a steady expansion of the leading EHS software, "sam*", which is already used by a half a million people worldwide. Its contribution to the total sales of the top innovator makes up to 16 %. The strength of the innovation climate inspires yet another strength - innovation success. The company is the benchmark in the German market for standard compliant software solutions in this business field, i.e. instruction and documentation software with an emphasis on the combination of environmental protection, occupational health and safety, as well as health and quality management. 75 % of its new sales in the last year was achieved with new innovations and optimizations that it had introduced into the market ahead of the competition. The company was awarded the "Top 100" seal this year for the second time, after previously receiving it in 2012.

"Our good ideas and their prompt implementation are a key competitive factor for us," adds the Managing Director, Jörg Klaas. "That is why we invest a lot of time and effort into our innovation management. We hereby rely on the creativity of all our employees. They deserve my thanks for the achievement of the 'Top 100' award."

The basis for the award of the Top 100 seal is a two-step analysis process that was developed by Prof. Nikolaus Franke and his team from his professorship in Entrepreneurship and Innovation at the University of Economics in Wien. The scientists review the innovation management and innovation success of the middle class company based on more than 100 parameters that are classified in five categories. The final decision on the company to be awarded the "Top 100" seal is exclusively made by the scientific management.

secova GmbH & Co. KG is based in Rheine in northwest Germany. It develops and distributes professional sam® documentation systems.

The main focus area of the browser-based, standard-compliant software is the EHS with focus on topics such as compliance, instruction technique, risk assessment, and management of hazardous substances. Since 2008, the 40-member expert team has won half a million new users who work with the different sam® function modules.

One of the reasons why renowned companies and groups are now loyal reference customers is because of the simple operating concept and the well thought-out functionality. With sam®, secova sets new standards in the areas of knowledge management, occupational health and safety, quality management, as well as HR.

The company and software solution have so far been honored with several awards, including the "IT Innovation Prize" or the "TOP 100 Most Innovative Company in Germany" in both 2012 and 2015 as well as the "Great Place to Work" award in 2014 and "TOP JOB" award for being one of the best employers in 2013.