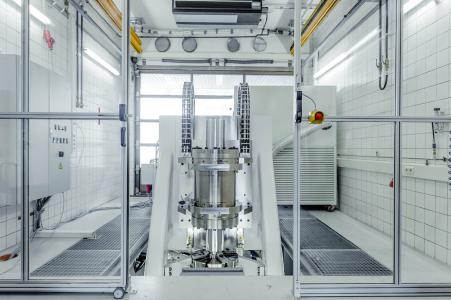 (PresseBox) ( Stuttgart, 12-08-02 )
To test its hydraulic rod seals - and really put parts through thick and thin before releasing them for really demanding applications - Trelleborg Sealing Solutions uses the most powerful test bench in the world. Trelleborg's state-of-the-art facility is capable of simulating the most gruelling conditions possible. It's also geared to replicating unexpected situations - scenarios that wouldn't normally be considered "standard," ranging from extreme use on excavators in the Australian outback to an aircraft landing gear being subjected to bumpy landings.

"At 260 kW, our floating-mount rod seal test bench has about as much punch as a race car," states Eric Seeling. "It also has a couple of unorthodox extras," continues the Trelleborg Sealing Solutions testing engineer, "such as the facility to simulate real stresses like temperature extremes and lateral forces. Weighing no less than 18 metric tons, the huge test bench is operated by the Stuttgart-based sealing experts to reproduce conditions their products might be exposed to when used in landing gear, mining excavators, or in other industrial applications. The conditions are designed to be as demanding and realistic as possible as the engineers need to simulate the patterns of movements and stress typical for seals, which can measure anywhere between 100 and 400 millimeters in diameter. Ultimately, the conditions have to be as lifelike as possible. The test bench can travel at speeds of up to 1 meter per second and generate movements and pressure patterns in sinus waves, trapezoidal forms and even freely modeled patterns. During endurance testing, the test bench can simulate for example 25,000 landings, or a million upstrokes on a press. Here the aim is to predict the long-term performance of individual kinds of seals.

Seals are expected to fulfill more and more demanding requirements. As product and system cycles shorten, solutions need to perform more effectively, in increasingly extreme applications. "As specialists, we have more suitable testing facilities or can set them up accordingly," states Holger Jordan, Manager of Fluid Power Technology. "Our biggest and most powerful test bench is definitely one of the highlights here." The machine even allows for the testing of complete sealing systems on a single test construction - systems that consist of primary and secondary seals. We can even replicate the pressure between the primary and secondary seals if necessary. One of the bench's more novel features is a lateral force cylinder mounted at the bottom of the seal test bench. Capable of exerting forces of up to 225 kN, it can place permanent stress on a rod, or - depending on the stroke - exert dynamic loads. The test engineers use the test bench to check parameters such as braking or lateral forces on undercarriages during landing. The equipment is also used to simulate life-like knocking on landing gear caused by uneven runways. Of course, the testing facility can also be used to assess the effects of what pilots consider a "bumpy landing" on aircraft landing gear sealing systems.

The test bench used by Trelleborg Sealing Solutions was designed, constructed and perfected by the company itself. Jordan explains why: "A good 35 years of testing experience went into the design of this test bench." The entire bench was placed in a concrete well cast specially for the facility so that vibrations can be isolated from the surrounding building. The drive unit was set up in a separate room so that energy otherwise lost through emissions can be used in an environmentally friendly manner to reheat the building.

Simulating conditions from Montreal to Melbourne

Another special feature integrated into the testing system is the facility to simulate different atmospheric temperatures. Not only is it possible to submit components to temperatures between +25°C and the upper limits of machine lubricants, the outside temperature can be set to anything between -60°C and +90°C. This makes it just as easy to mirror operations with a excavator in a mine in the Australian outback as the extreme cold of North America. "The results can be fully documented, allowing our customers to provide their own clients with complete proof of performance - on the sealing system of their choice, under the testing parameters captured in the specification," states Seeling.

A one-stop-shop with advanced development know-how