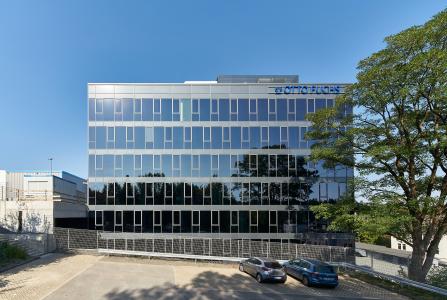 (PresseBox) ( Bielefeld, 21-03-08 )
OTTO FUCHS KG is based in Meinerzhagen, North Rhine-Westphalia. The dynamic development of this leading international company in the non-ferrous metal industry led to the construction of a new office building and production hall in 2020. In order to showcase the innovative force of OTTO FUCHS KG, the client and the architects from Atelier Christ used Schüco profiles with self-tinting SageGlass® sun shading glass and the FACID fabric façade.

Lightweight metal safety components in cars, aeroplanes and machinery often come from OTTO FUCHS, which has been producing parts for the industry at its site in Meinerzhagen for over 100 years. Over the past decade, the desire for low-carbon construction methods has helped the lightweight construction division grow, and with it the need for research and development. A decision was therefore made in 2015 to bring together the product development teams into one building that meets today's requirements for a working environment. Coined the "technology centre" and designed by Atelier Christ, the new office building was completed five years later following 22 months of construction, and in September 2020 the teams moved in. It is designed for 100 to 150 workstations and its gross floor space measures around 5000 m2.

The seven-storey cube of the technology centre is located on the southeast edge of the company's site, slotting into the hillside and visible from the town centre. The four upper floors thereby provide a new landmark for the townscape. Another feature that makes this building special, however, is the building shell, which is fully glazed and based on the Schüco FWS 60.HI mullion/transom construction with fixed glass units and turn/tilt window vents from the AWS 75 BS.HI series. The built-in double insulating glass is made from electrochromic SageGlass® from Saint-Gobain. The glass façade works with a sensor-controlled daylight management system, which the panes use to automatically tint based on the measurement results of the sensors, in order to ensure sufficient glare protection and thermal insulation in summer without the need for additional shading devices.

The shareholders were particularly keen to ensure that the openness and light provided by the glass façade were not be impaired by external sun shading. The latter should also work when it is windy, especially given the fact that the building is so exposed. Furthermore, the client was impressed by the low maintenance costs of the electrochromic glazing. Architect Jürgen T. Christ adds, "You have unrestricted views outside, even when there is direct sunlight. Without the need for external sun shading, OTTO FUCHS is also saving valuable floor space at around 15 centimetres per façade. Moreover, our client is also highlighting the innovative force of one of its own companies through the use of this pioneering façade technology."

The electrochromic SageGlass® from Saint-Gobain has been used on all four façades, as well as the roof of the northwest-facing entrance atrium. This extends upwards over six of the seven floors, allowing daylight to reach the lower storeys. The open levels arranged around the atrium contain a mixture of large offices flooded with light, small offices and meeting rooms, think tank spaces, communication zones and service areas. The room-height façade glazing is divided vertically into three individually controlled zones on each floor. The glass has been split into groups horizontally. This allows people to work at all times of day without glare and enjoy optimum daylight in all weather conditions. The individual window zones are controlled automatically, but can also be regulated manually. This means that every employee can use the tablets in the offices to enter their own shading settings, for example for meetings or presentations. The panes of glass tint quickly, noiselessly and dynamically, without disturbing the users.

The Freudenberg-based architects also designed a 3000 m2, elongated production hall for manufacturing dies and systems. This is attached directly to the office building. The long sides and gable ends of the hall which face the town centre were clad in the Schüco FACID 65 textile façade. On this, the client has digitally printed a continuous shade of grey and the materials used by the company – AI for aluminium, Ti for titanium, Mg for magnesium and Cu for copper. A stylised fox's head – the company's logo – was also applied to the fabric, along with a web of fine, bright lines and points which resemble chains of molecules. The textile façade thereby illustrates the DNA of OTTO FUCHS.

70 years of Schüco - System solutions for windows, doors and façades

Based in Bielefeld, the Schüco Group develops and sells system solutions for windows, doors and façades. With 5650 employees worldwide, the company strives to be the industry leader in terms of technology and service both now and in the future. In addition to innovative products for residential and commercial buildings, the building envelope specialist offers consultation and digital solutions for all phases of a building project - from the initial idea through to design, fabrication and installation. Schüco works with 12,000 architectural practices, fabricators and construction professionals who commission buildings around the world. Founded in 1951, the company is now active in more than 80 countries and achieved a turnover of 1.750 billion euros in 2019. For more information, visit www.schueco.com