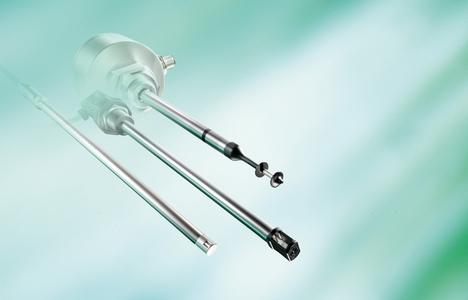 (PresseBox) ( St. Georgen, 10-10-28 )
Thermal anemometry is a method for measuring the flow of gaseous fluids based on the equilibrium between heat generation and heat removal by forced convection. Flow velocities can be measured by a wide range of measurement principles, such as differential pressure, laser scattering or heat convection, of which thermal anemometry can detect even minimal flow velocities and determine, in addition to their magnitude, also their direction.

Hot-wire anemometers have an electrically heated metal wire as resistance clamped between two holding tips. Hot-film sensors have a thin metal film on a glass substrate in place of the hot wire. More robust and less complicated than hot-film sensors are heated NTC pearl-shaped sensors, because they have a protective jacket and are available as standard components for temperature measurement. For installation into flow ducts, the sensors are equipped with various support shapes and supply lines. Sensors for mounting have a rod-like sensor with a measuring head fitted either with a thin-film element or an NTC pearl, and its protective housing gives the sensor necessarily a directional characteristic.

Thermal flow meters are suitable in particular for measuring mass flow. They consist of pre-fabricated measuring tubes with thermal measuring elements and display units. The sensor system consists of an electronic bridge circuit, a control device and digital measured value operators and output interfaces. The measuring circuit works by one of two methods: In the cooling method, the flow is detected via the cooling of the fluid of the heated measuring element. In the constant temperature method, the heating capacity is a measure of the flow velocity controlled electronically as a function of the removed heat flow.

If a medium flows around the thermal sensor element, the convective heat removal will change the electric conditions of the of the measuring circuit. Suitable auxiliary measurement parameters are detected whose changes are used to infer the flow velocity. The most common methods for operating anemometers include Constant-Current Anemometry (CCA) and Constant-Temperature Anemometry (CTA).

CCA measures the sensor resistance and does not require complicated control since the sensor is heated with constant current. This measuring circuit is highly suitable for small flow velocities, but not for quick changes in flow. Here CTA measuring circuits come in handy, since their quick control circuits keep the sensor at a constant temperature by resupplying current or voltage. Advantage: the sensor temperature can be determined, which also allows the temperature effect to be corrected theoretically. In contrast to the Constant-Current Anemometer, CTA also has much higher sensitivity over a broad temperature range.

The thermal measurement method allows a very broad measurement range from approx. 0.1 to 200 m/s. Moreover, small sensor dimensions are possible, at which the sensor has low inertia to variations in flow. Frequency limits of up to 600 kHz and quantitative determination of the degree of turbulence are possible. Flow measurements with thermal anemometers are not only suitable for small duct flows. Measurements of mass and volumetric flows under standard conditions can be carried out directly without requiring any other secondary measurement parameters.