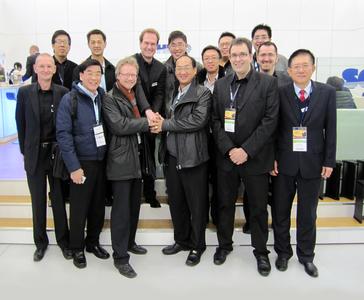 (PresseBox) ( Freudenstadt, 11-03-11 )
As the largest exhibitor at the world's greatest photovoltaic trade fair, the 5th SNEC which took place from 22nd to 24th February 2011 in Shanghai in China, Schmid presented themselves over an area of around 620 square meters. The exhibition stand was manned by a team of over 100 personnel from Germany, China and other Asian representatives.

With a total of 1,800 exhibitors and the additional conference, the international trade fair proved to be an excellent platform for both business and technologies. The rapid growth of the Chinese trade fair is due not only to the increase in Asian photovoltaic manufacturers but also to the increase in photovoltaic installations in this part of the world. Schmid presented a number of technological innovations from the photovoltaic sector, designed for increasing productivity and reducing total process costs. With new metallizing concepts such as Laser Transfer Printing, for example, and the Inkjet technology for applying metallic nano particles, Schmid corroborated once again their technological leadership in this sector.

Besides numerous single process equipments, three turnkey cell plants were also contracted by the Schmid Group. This included, among others, the contract for a Malaysian solar cell plant using the latest Selective Emitter technology and a capacity of 60 megawatt. In addition to this, a contract for a complete silicon factory was concluded one day before the exhibition by Schmid Silicon Technology GmbH (as already reported). The order value of all agreements signed at the fair totals around 400 million euros.