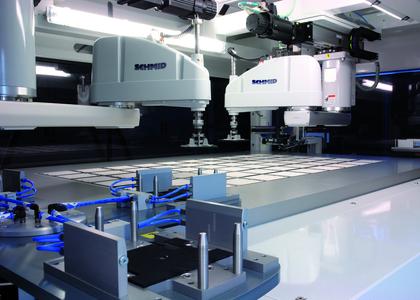 With exclusivity agreements reached in August 2008 with the Japanese companies Ishii Hyoki and Shimadzu, the Schmid Group has expanded its turnkey capacity in the wafer and cell sectors. By acquiring a majority share in the US company SierraTherm in late 2008, Schmid expanded its company product portfolio to include diffusion, drying and firing furnaces.

With its strategic partnership with Ishii Hyoki, the Japanese specialist in wire saws and slurry recycling technologies, Gebr. Schmid based in Freudenstadt, Germany, has expanded its existing process chain consisting of pre-cleaning, separation, final cleaning and metrology sorting. The important new process element is sawing the solar wafer ingots using slurry management and recycling. The first systems were successfully introduced on the market in the fourth quarter of 2008.

In a second step, undertaken in conjunction with the cooperation partner, Schmid will offer a complete wafer turnkey solution with ingot production for mono- and multi-crystal wafers as well as bricking processes. Schmid aims to introduce this wafer turnkey line on the market in the second quarter of 2009.

Because the thin wafers can easily break during separation, wafer singulation is another important element in wafer production. The wafers are thus carefully separated in a water bath. Two parallel feed positions and two singulation units ensure a throughput of up to 2000 wafers per hour, depending on wafer thickness. Broken wafers are automatically identified and sorted out. Specially developed transport systems convey the elements automatically to the high-quality Schmid final cleaning process.

By integrating the Shimadzu PECVD coating units (plasma enhanced chemical vapor deposition), which are characterized by their outstanding reliability and process results, into the solar cell production chain, the Schmid Group further optimized the process parameters.

In the technology center at Freudenstadt, Germany, Gebr. Schmid process engineers are working on process optimization as well as the development of novel cell concepts. Using our successful InkJet technology, Schmid was able to increase cell efficiency by 0.4 % to 0.8 % via the generation of selective emitters. The InkJet printer is offered in a package with a subsequent wet process, and can also be linked inline with a wet chemical junction isolation and phosphorus glass etching. The Schmid InkJet printer features noncontact printing of very small design elements (L/S 80/40 µm) with position precision values of ± 15µm (for wafers between 5" and 6"), as well as outstanding process stability with a throughput of up to 2000 wafers per hour. This concept for the implementation of selective emitters in conjunction with our InkJet technology will be introduced onto the market in the first quarter of 2009.

The Schmid Global Connecting System carries out a variety of cell connection steps while reducing the number of process steps in which the cells are contacted by 40%. The system can be integrated into any production line, is suited for cell sizes between 125 and 156 mm, and reduces module cycle times from 90 to 75 seconds. Equipped with a variably adjustable suction unit, the new connecting system has an active temperature control which permits rapid, noncontact soldering with low heat input into the cells. Jürgen K. Heller, the director of Schmid Technology Systems in Niedereschach, Germany, will describe the Global Connecting System at the Fourth PV Production Equipment Conference in Munich, Germany, on March 4, 2009. Heller will also present on the topic "Cell Connection Strategies for Reducing Breakage during the Use of Thin Cells."

The Schmid Group has big plans for 2009. One goal is enhancing the leadership position on the technological market by expanding the product portfolio and thus expanding the turnkey competence. Schmid has already paved the way for meeting this goal by reaching strategic cooperation agreements and assuming a majority share in SierraTherm. Highly qualified process engineers are working at the technology center in Freudenstadt, Germany to develop new concepts for wafer and cell production.

As part of its long-term corporate strategy, Schmid is also strengthening its market presence and increasing its production capacity in order to meet the increased demand for process equipment. For this reason, Schmid founded two new companies in Asia and incorporated them into the Schmid Group: Schmid Zhuhai Ltd. (SZL) and Schmid Singapore Private Ltd. (SSP).

The modern production facility in Zhuhai, which includes a six-story glass-paned office building, has a production area of 14.000 m². The facility was officially opened in December 2008, although production commenced there in September 2008. The marketing and service branch in Singapore also provides process support for customer installations in Singapore, Thailand, Malaysia, Indonesia and the Philippines. In a second step, the SSP facility will be expanded to include a development department.